Both Queensland and New South Wales are embarking on a road that may lead to electricity privatisation, but those states should heed the lessons learned by their southern neighbours who tread that path nearly 20 years ago. We know from bitter experience that "competition" in electricity does not result in lower prices for consumers, nor other touted benefits of privatisation. 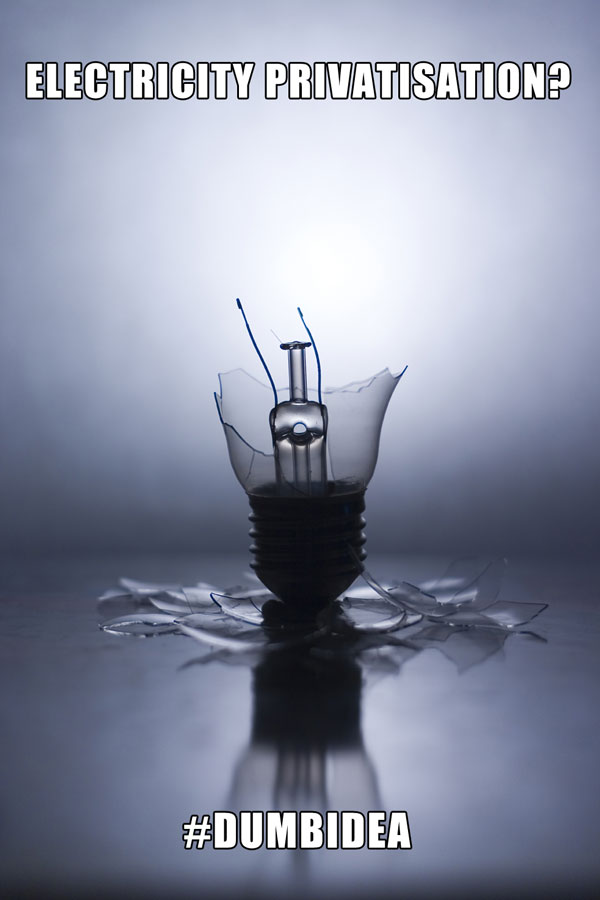 Both Victoria and South Australia privatised their electricity sectors years ago, in Victoria's case, nearly 20 years ago, and in SA nearly 15 years ago, so the effects of privatisation should be very clear by now.

The problem is that both Victoria and SA have the highest electricity prices in the country! Privatisation promised cheaper prices, but Victorians and South Australians are paying more than anyone else in Australia.

Privatisation will not protect jobs

In addition to the effects of pure downsizing, private companies are more likely to shift certain jobs to hubs in major cities, some interstate, some overseas (offshoring) and these job losses have a devastating effect on local communities, particularly in regional areas.

Electricity privatisation in South Australia occurred in 1999-2000 but followed the same pattern as Victoria, with job losses and contracting out with local jobs being sent to hubs in Canberra and Melbourne.

Privatisation will not lead to better services & investment

Another item in the privatisation song book is that it will deliver greater efficiencies and service levels. What has actually resulted in the electricity sector is that customers have seen reduced service, for example, much more difficulty in accessing assistance with their accounts. Network maintenance has been slashed in the race for profits, repairs take longer to occur, etc.

Victoria's Premier at the time of electricity privatisation, Jeff Kennett, promised more jobs in the La Trobe Valley and greater investment in the area as a result of privatisation and the involvement of multinational companies.

In fact, what did occur was that many small businesses in the Valley failed due to the high unemployment rate and consequent lack of economic activity. The knock on effect on small business persists to this day.

Listen to our ASU member explain what happened to his community in the La Trobe Valley.

ASU Assistant National Secretary Greg McLean said, "There can be no doubt about the damaging effects of electricity privatisation – costs to consumers go up, not down; jobs are lost, not created; and local communities are irretrievably damaged."

"The Federal Government's privatisation agenda is clear with incentives offered to states and territories to sell off their assets - with so many horror cuts in the Federal Budget in May, the idea of redirecting funds from the vulnerable to a venture that will only cost communities even more down the line is disgraceful," said Greg McLean.

Michael Rizzo has been an electricity specialist for the ASU for 22 years, and was heavily involved with the sector during the privatisation years in Victoria.

Other adverse effects of privatisation

There are other adverse effects of privatisation that we can name, including the downgrading or disappearance of pro social and environmental policies within electricity companies. State owned electricity companies also committed to training large numbers of new apprentices each year. Public companies are also more likely to encourage customers to consume less, when private companies want you to consume more so as to boost profit.

There have been many lessons from the privatisation of electricity in Victoria and South Australia.

"Once these assets are sold, we can never get them back in public hands, as state governments never have a spare $20billion lying around for such a purpose. When they're gone, they're gone!" said Greg McLean.

Join the campaigns against privatisation

NSW: Stop The Sell Off

QLD: Our Queensland Our Future

Work in the electricity sector? Join your Union!