Legislation was passed nearly forty years ago for women to receive equal pay. However, women in full time paid work still earn 18% less, are more likely to have a tertiary qualification but retire with less than 50% superannuation savings compared with men. Unions, in particular strong union women, have been integral to campaigns, lobbying and protests for paid parental leave, universal suffrage, equal pay, and workplace rights facilitating other family and care responsibilities.

We have come a long way and can achieve what we want by keeping Unions involved in Women's work.

Getting involved with your Union means you can further campaigns for pay equity, quality jobs with family friendly work arrangements, improved superannuation, accessible and affordable child care and out of school hours care and effective equal opportunity and anti-discrimination legislation. 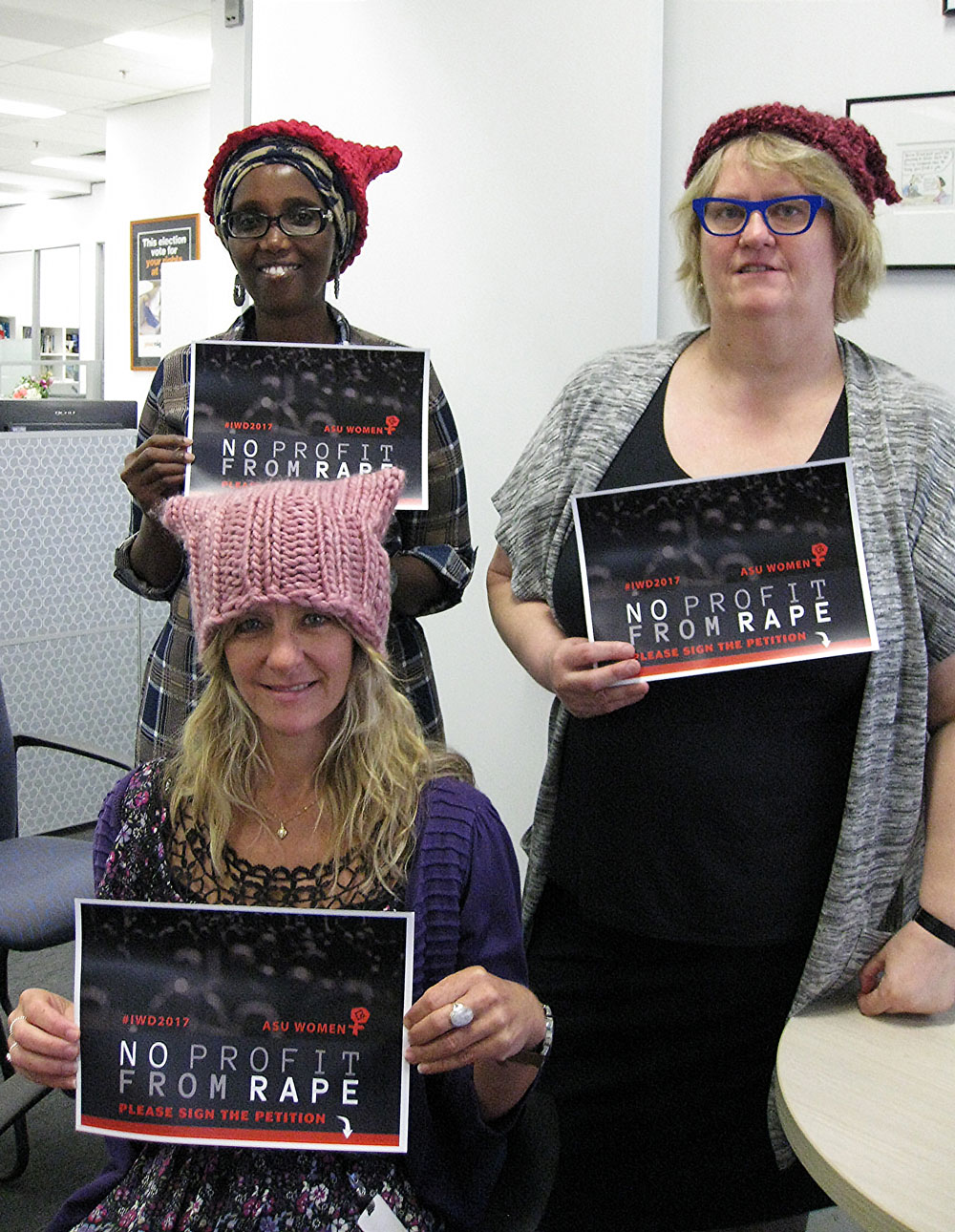 In 2017 the ASU is encouraging supporters to wear the instantly iconic #PussyHat to celebrate #IWD2017 and the theme of #HandsOffMyRightsAU.

You can learn more about the symbolism and why we've chosen to use it this year to anchor our activities, you can read Dr Anne Summers article in the Sydney Morning Herald here: "Beware Donald Trump: the pussy hat will be the protest symbol of our times"

Our key action for #IWD2017 is asking everyone to sign the petition to save the #1800RESPECT counselling service for victims of sexual violence. You can sign here: bit.ly/no-profit-from-rape-2017 #NoProfitFromRape.

Better yet, take a selfie/photo in your #PussyHat holding up the sign supporting the petition and post it on your social media to encourage your networks to also support the petition.

Learn more about how to get involved via posts on our ASU Facebook Page or contact Joanne Knight at the ASU National Office.

Animated GIF by:
henrynoodle @instagram.com - many thanks!

The National Women's Consultative Committee (NWCC) is a committee of women who represent each Branch of the ASU. If you wish to be active in your Branch and participate in the Branch Women's Committee or organising in your workplace you should contact your NWCC representative at the details listed below.

The aim of the Anna Stewart Memorial Project is to increase women's involvement in the union movement through training. The project has been in existence since 1984 when the Municipal Officers' Association (a precursor union of the ASU) established it and so far over 1000 women have participated across the country.

During the two week project women trade union members from diverse workplaces and occupations are placed with their own, and sometimes with another union. They experience the full range of union work, including mass meetings, enterprise bargaining negotiations and hearings in the Industrial relations Commission. All participants meet together during the project to discuss women, work and union issues. They are generally sponsored by unions and there is no charge for attending the course.

Who was Anna Stewart?

Anna Stewart, a former journalist and active Victorian union official from 1974 to 1983, died tragically in 1983, aged 35. Her involvement with the union movement began at a time when women workers comprised one-third of the paid workforce, but the few industries in which women were employed, offered jobs that were poorly paid, lacked job security and skills recognition.

A prime consideration motivating Anna was the need to develop strategies to address the issues confronting working women and to highlight the important contribution that women make to the trade union movement.

With the Federated Furnishing Trades Society of Australia, Anna Stewart successfully spear-headed the first blue collar union campaign for maternity leave award provisions. At the time Anna was in the late stages of pregnancy with her third child.

As Senior Federal Industrial Officer with the Municipal Officers Association, Anna initiated women's committees in most state branches of the union and developed strong policies in relation to women workers. After her death, the MOA adopted the Affirmative Action Policy that Anna developed.

The influence of Anna's work is difficult to measure. Many women gained strength and confidence from her example of combining motherhood and a career. During Commission hearings Anna Stewart would either breast feed her young son or seek adjournments to do so, exposing the Commission, employers and the union to the needs of women workers. In addition, Anna secured many conditions for the members she represented and indirectly for all working women, by setting these precedents.

Women unionists are fortunate to have Anna's example to assist and support them in the struggles that continue today.

The image above of Anna Stewart was created for the national Peoplescape project of 2001, commemorating people who have contributed to the development of the nation over the last century. Read more about it here.

After Anna's death, a number of her trade union friends and colleagues met to determine the most appropriate means by which her work and life could be remembered. The founders of the Memorial felt that a project based around the Working Women's Charter demand for increased involvement in trade unions was immediately relevant to Anna's memory and to the needs of the female workforce. This was felt to be particularly appropriate in light of statistics that showed that, despite the large numbers of women joining trade unions, women were still under-represented in decision-making structures.

The Anna Stewart Memorial Project was thus born and the inaugural program was co-ordinated by the Municipal Officers Association in Victoria in April 1984.

The Project was conceived as an annual two week "on the job" training program for women unionists. It was designed to give participants unique levels of access to union organizations, and develop their awareness of the ways in which unions can work to redress the discrimination and exploitation of women workers in Australia. Unions also benefit by increased sensitivity to the needs of, and issues affecting women workers.

For more information about the Anna Stewart Memorial Project in your area please contact your ASU Branch Women's Officer or your local trades and labour council:

The materials listed which are not ASU publications are not necessarily endorsed by the ASU but may be of interest to you.