New report reveals retirement is not so super for women

Following two major ASU surveys about retirement security, what we learned demanded further study and the search for solutions. Today we are proud to launch the report: “Not So Super, For Women: Superannuation and Women’s Retirement Outcomes”, in collaboration with progressive think tank Per Capita. The report confirms our findings, but importantly, it outlines some significant recommendations which we believe will greatly improve retirement outcomes for low paid workers. 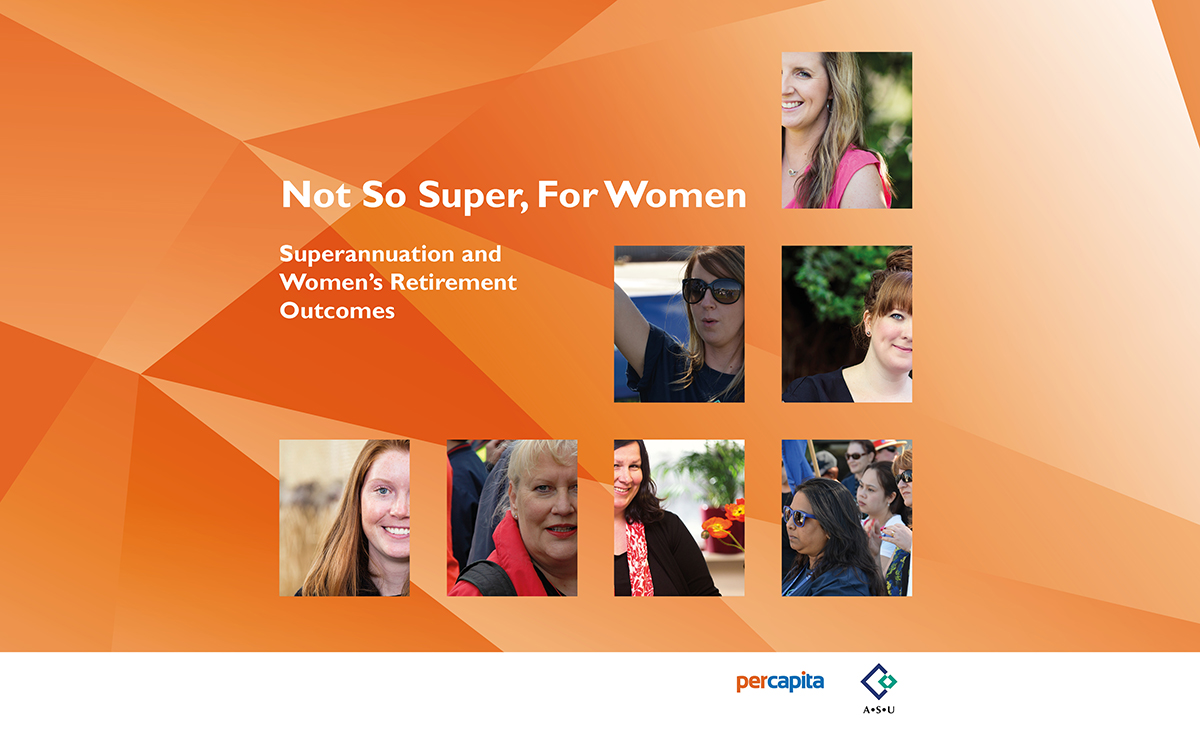 Australia’s compulsory superannuation system is failing women. According to the latest figures, women are retiring with around half as much superannuation (53%) as men.

In a major research collaboration, Per Capita and the Australian Services Union have conducted surveys with over 4,000 workers and analysed available data to examine the causes of the gender superannuation gap, and developed recommendations to close the gap.

“In accumulating superannuation, women face a ‘wicked problem’. Their work is more intermittent and lower paid than that of their male counterparts. Combined with the fact that they still do the overwhelming majority of unpaid housework, parenting and caring, this has meant that the benefits of super have not flowed to women as hoped.” David Hetherington, Senior Fellow at Per Capita, said.

The report finds that the most significant explanation for the superannuation gender gap is motherhood.

“While mothers suffer a very substantial pay and superannuation penalty compared to women without children, fathers receive a super and pay bonus, earning more, and accumulating more super than men who are not fathers.” said Mr Hetherington.

The report recommends tracking all superannuation balances in order to intervene for those who are falling behind an acceptable ‘accumulation pathway’.

The report recommends tracking all superannuation balances in order to intervene for those who are falling behind an acceptable ‘accumulation pathway’. Such interventions could include government top-ups, tax relief, superannuation account fee discounts and the inclusion of a superannuation component to Family Tax Benefit B.

ASU National Secretary David Smith said, “The ASU’s surveys revealed heartbreaking stories of women who will work most of their lives only to reach retirement facing a life of poverty – but documenting the problem is not enough. This report provides policy initiatives that are simple, achievable and measurable recommendations that we believe will, over time, greatly improve the superannuation outcomes for women in Australia.”

Other recommendations are more systemic, including:

We wish to thank the thousands of people who completed to our two surveys on retirement and superannuation. It was your candid responses that sharpened the focus on the systemic problems that exist and ensured that many would take note when we brought your stories to them. We will continue to campaign to alleviate the prospect of poverty and hardship that many low paid workers face – this new report will provide a blueprint for that campaign.

Not So Super, For Women: Superannuation and Women’s Retirement Outcomes (August 2017 version)

How superannuation puts women at a disadvantage: "I will be stuffed" - by Georgia Dixon, Over60, 20 July 2017

Thanks for caring, now your Superannuation’s worth half as much as men - by Angela Priestly, Women's Agenda, 20 July 2017

Superannuation: Women on track to retire with half as much as men, study finds, by Antoinette Lattouf, ABC News Online, 20 July 2017
Also available on news websites of: MSN Money

The retirement system is failing our mothers, by Jackson Stiles, The New Daily, 20 July 2017

The superannuation system doesn't work for women. It's time to do better, by David Hetherington (opinion piece by report co-author), The Guardian, 24 July 2017

Most superannuation nest eggs won’t save you from a pension, by Judith Sloan, The Australian, 24 July 2017

Why super has lost its lustre, by Daryl Dixon (comment), Brisbane Times, 30 July 2017

How to balance a career with ‘Potential Motherhood’, by Angela Priestley, Women's Agenda, 3 August 2017

Not So Super, For Women, (starts at 1:35:48) ABC radio Sydney, Mornings Institute with Wendy Harmer, interview with David Hetherington of Per Capita

Women Are Being Dudded When They Need Cash Most, by Charlotte Willis, whimn.com.au, 27 October 2017

Childcare workers' strike: 'We educate these children, we're not babysitting, by Neha Kale, The Guardian 26 March 2018

Retirement not so super, for women, By Meredith Booth, Investment Magazine 4 May 2018

Poverty & hardship in retirement was not what we bargained for, 17 November 2016

Help us achieve a superannuation system that guarantees retirement security for all, 18 October 2016

Senate agrees with ASU on retirement security of women – much more must be done, 24 May 2016

Financial insecurity in retirement – how do we address inequality to avoid hardship & poverty? 6 October 2015