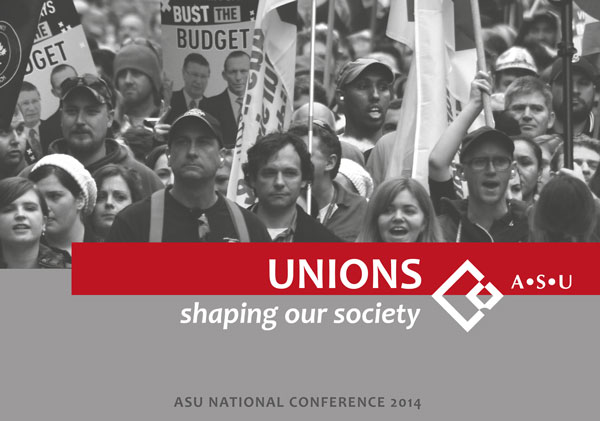 The biennial ASU National Conference will be held in 2014 in Melbourne from Monday 17 November to Wednesday 19 November at the ME Bank Centre at the Punt Road Oval in Richmond, an inner suburb of Melbourne.

National Conference theme Click to collapse
This year's National Conference theme,"unions shaping our society", is intended to capture the union movement's role in creating a better Australia through participation in community building with collective action. This occurs not just in workplaces and through industrial relations, which is of course our core area of activity, but also through involvement in broader debates. This year's "Bust the Budget" activism is one of many examples. The National Conference agenda will reflect on the union movement's role in shaping a more civil society, with special focus from the keynote speaker, the Q&A session and our workshops.
Civil society, noun, Society considered as a community of citizens linked by common interests and collective activity. [Oxford Dictionary]
National Conference materials Click to collapse
Social media & WiFi connection Click to collapse

Local WiFi connection at ME Bank Centre: ASUNC14 (no password is needed)

Following are the key presentations and sessions at the National Conference:

The National Delegate of the Year Award is presented biennially at the ASU National Conference. It recognises in all nominees the dedication and spirit that makes the union movement great through its activists. HESTA Industry SuperFund is the generous sponsor of the 2014 Awards. Introduced by ASU National Vice President Ingrid Stitt.

Delegate of the Year Nominee Profiles

Life Membership of the Union is bestowed on members in recognition of their dedication over the years to the Australian Services Union.

Click here to do the Evaluation Survey - a password will be provided to delegates and observers to gain access to the evaluation survey where they can provide feedback on all elements of this year's Conference.

Please click on the logos to visit their websites