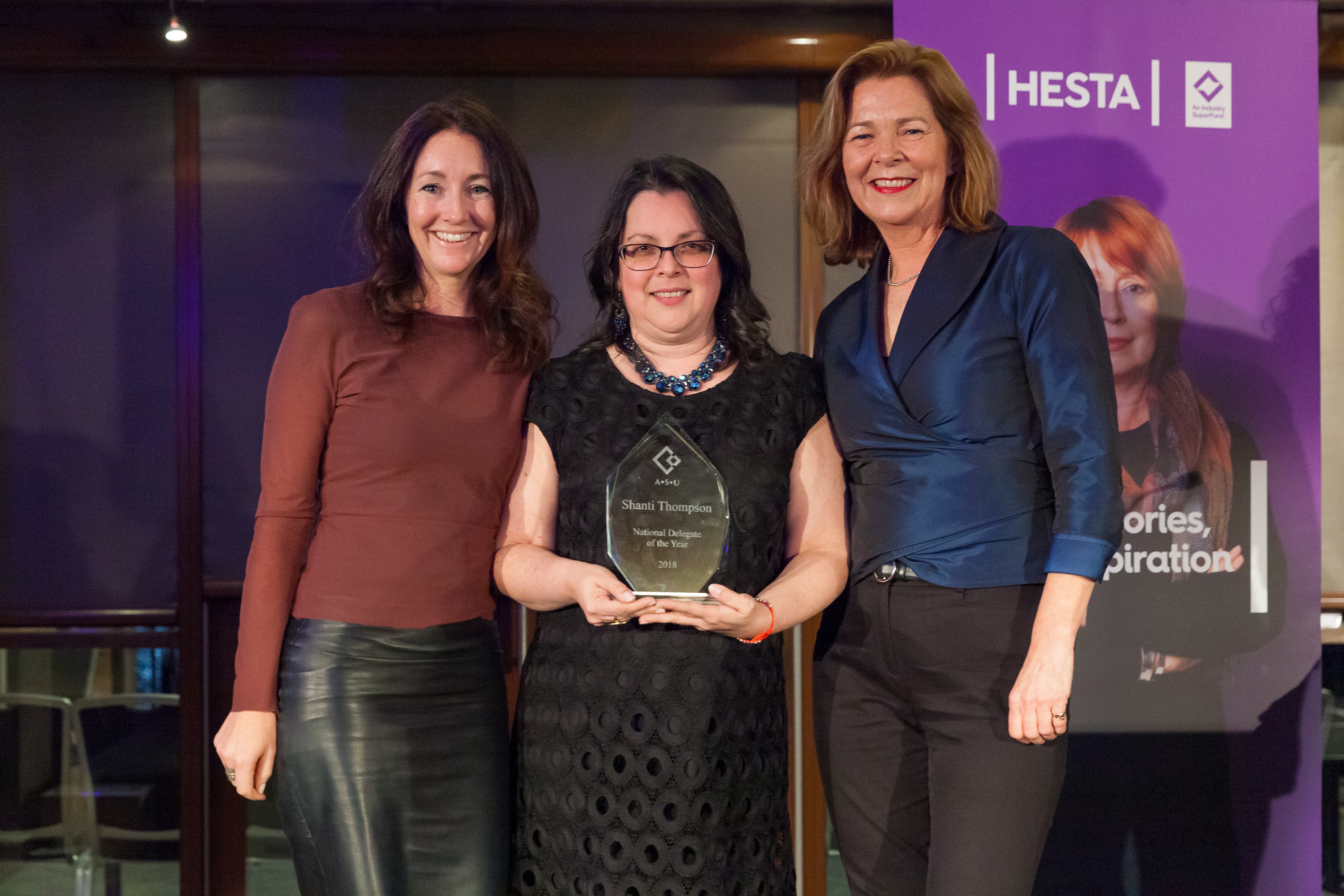 At the National Conference Dinner on Thursday 22 November, Shanti Thompson of the Queensland Together Branch was announced as the ASU National Delegate of the Year 2018. It was awarded for her work as a delegate at The Department of Environment and Science in the Qld Public Service. This biennial award is a key event at each National Conference because we cannot overstate the crucial role played by workplace representatives in the ASU and all unions.

Congratulations to Shanti on receiving this award in recognition of her dedication and we thank her, the other nominees and all our delegates around Australia for their invaluable contributions to our Union!

Shanti was nominated for her commitment and leadership as a delegate for over 10 years and, particularly, for her outstanding work leading the Core enterprise bargaining campaign throughout 2018.

Shanti has helped develop the bargaining and organising strategy for the Core EB and for her department specifically. She has taken a leading role in negotiations with the employer (state government) and in leading the large group of delegates from across the state who are driving the campaign. She is a representative on the agency negotiating group for their agency specific claims as well as the Core EB Single Bargaining Unit and also attends regular meetings with the Director General to address issues within her agency. In all these negotiations Shanti can be counted on to articulately challenge the ‘bosses’ using concrete examples from her workplaces. She does not give up. Delegates know she has their backs and will back them up in negotiations.

As one of the co-chairs of the Core Enterprise Bargaining Steering Committee of delegates from the agencies covered by the Core, Shanti has facilitated the involvement of other delegates, ensured delegates are kept up to date with negotiations and encouraged delegates to be the voice of the campaign in their own workplaces.

Over 750 new members have joined across the Core agencies since the start of the campaign. Even though she works with people who are anti-union, Shanti has continued to ask new employees and potential members to join and recruited new delegates to grow the union strength of her department.

At member meetings she has organised, Shanti has moved members to take action by taking the lead and outlining the action she will take and bringing members with her. Her department was the first to vote for a Protected Action Ballot in the Core campaign and the first to institute a work ban as part of the campaign. She ‘walks the walk’ by being prepared to organise and take collective action to support the negotiations.

Shanti led the members from her department to stop work as part of protected industrial action recently in support of the Core negotiations. They joined over 600 other members in picketing 1 William St, the government building that houses all the state government ministers. Using a megaphone while standing on a garden wall, Shanti spoke to the striking members about the importance of their actions in support of their claims.

Her strong values of justice and fairness are demonstrated by her actions as a strong, long-term supporter of APHEDA, her support for the rights of refugees and asylum seekers and her activism in support of the marriage equality campaign.

Sticking by her principles is a hallmark of Shanti’s union activism. She can be counted on to speak up if she doesn’t agree with a course of action, regardless of how strongly others feel about the matter. She has demonstrated this many times in debates at Together Branch Council and Branch Conference meetings.

Together members are very fortunate to have a delegate with the energy and commitment Shanti shows every day. She is a HR officer; she is a union delegate representing her members in her workplace, in consultative forums and in the central negotiations for the Core agreement; she co-chairs the Core Steering Committee and she has also been an elected representative on her union’s elected structures since 2007. She is currently elected to represent her members on Together Branch Conference, Branch Council and National Conference.

Well done Shanti, enjoy this well-deserved recognition and your prize!

A word about being a workplace delegate

Delegates and other workplace representatives donate their time and energy to create a better future for their colleagues and workers in general. Without these volunteers, unions would not be able to do so much of the work involved in defending and advancing workers’ rights.

Unions are communities of workers and unless we strive together, we won’t be able to get a better deal at work, let alone defend the rights we have.

If you are interested in becoming a workplace delegate, contact your ASU Branch and thank you for putting your hand up to be an active part of the ASU community!