Last night, the winner of the ASU National Delegate of the Year 2014 was announced at the Conference Dinner as one of the key events of the Program. It was awarded to Aaron De La Torre of the Victorian & Tasmanian Authorities & Services Branch for his work at Qantas in Tasmania. His efforts were lauded as "innovative and creative ways to campaign, recruit and activate members". 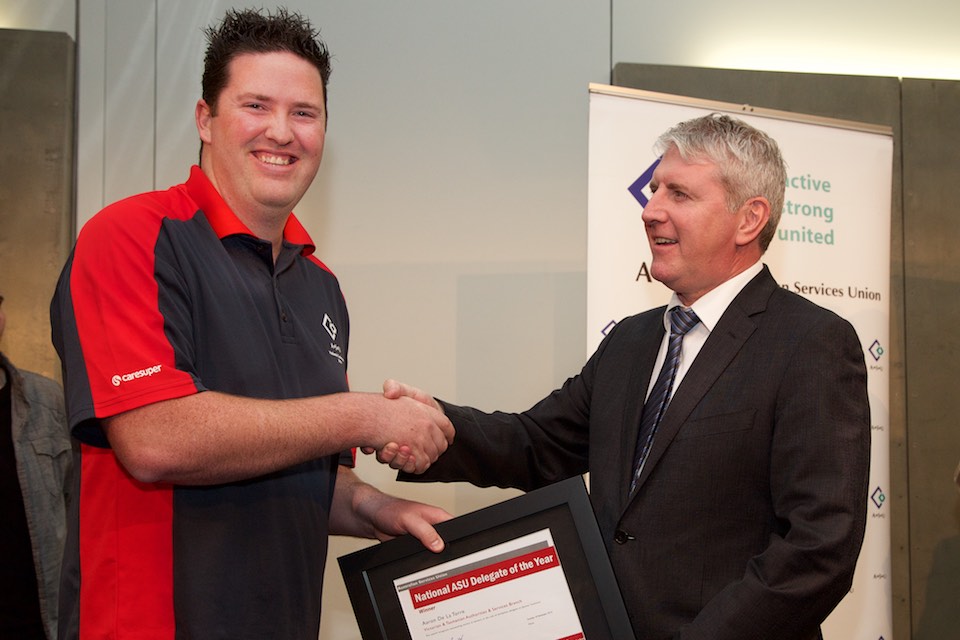 We congratulate Aaron for his well-deserved win!

In addition to his role as workplace delegate at Qantas at a very tough time for the national carrier, Aaron also is a member of his Branch Executive giving up even more of his own time to represent the interests of the members in his workplace at this forum. His energy was identified and his impact on the strength of the ASU in his workplace as a result of his efforts.

The Award was judged at arm's length by Samantha Bond, Director of the ACTU Organising Centre. She had the following to say about the judging task:

Each of the amazing Delegates on the short-list could have easily stepped up to the podium to accept this award. What a talented, passionate group of amazing Delegates you have on this list. I have gone through the criteria over and over to try to come up with the fairest solution but I would like to say that the final decision made me feel a little sad because each person deserves an enormous amount of credit for their commitment to the union and workplace fairness for all.

We totally agree with Samantha – all our nominees and indeed, all our delegates and activists, deserve an award because it is through their work that the Union is strong. Without their contribution, there can be no Union, no collective, no line of defence against workers being made to pay for others' prosperity with no share for them and their families and communities.

Aaron was presented with his award by the Hon Brendan O'Connor MP (pictured with Aaron), Nick Cowling of HESTA Industry SuperFund (the sponsor of the Award) and ASU National Secretary David Smith. He received a trophy, framed certificate and a Microsoft Surface Pro 3 (a laptop / tablet hybrid).

Brendan O'Connor, a former official of the ASU before entering the Federal Parliament in 2001, kicked off the presentations with a passionate speech about the value of delegates and the critical importance of activism, firing up the Dinner audience for the continuing fight to protect workers' rights from Federal Government assaults – from the shop floor to the union office, we all have a role to play.

Delegate of the Year nominees

You can read about all the nominees here:

In making their nominations, Branches were asked to provide information about their delegate based on the following criteria: