Home » News » News by category » General Airlines » In the balance: Livelihoods of airline workers under duress if support stops

In the balance: Livelihoods of airline workers under duress if support stops 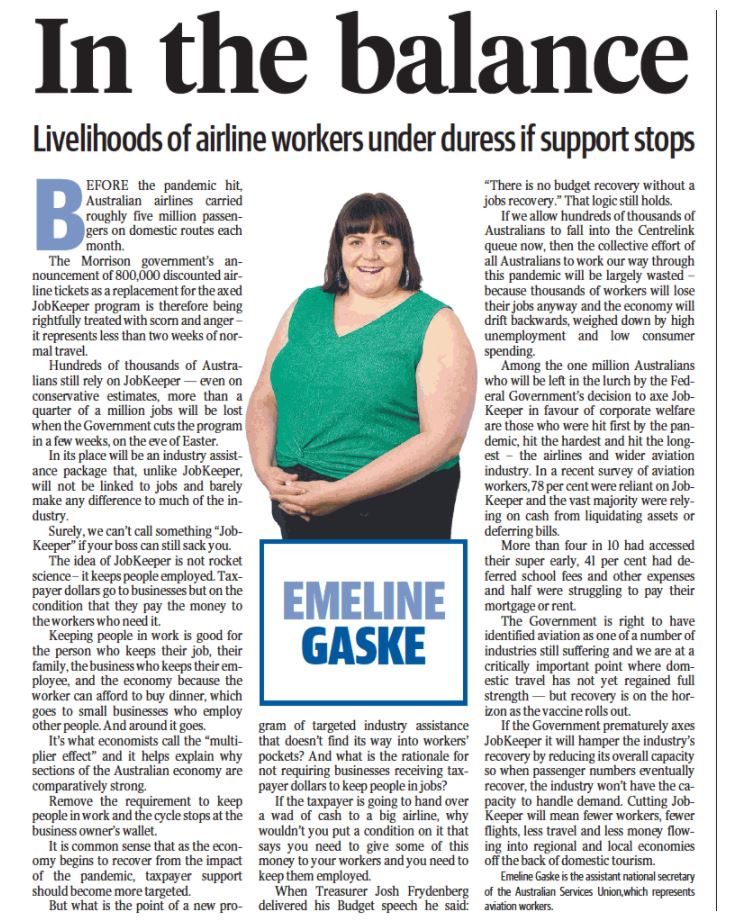 The Morrison government’s announcement of 800,000 discounted airline tickets as a replacement for the axed JobKeeper program is therefore being rightfully treated with scorn and anger – it represents less than two weeks of normal travel.

Hundreds of thousands of Australians still rely on JobKeeper — even on conservative estimates, more than a quarter of a million jobs will be lost when the Government cuts the program in a few weeks, on the eve of Easter.

In its place will be an industry assistance package that, unlike JobKeeper, will not be linked to jobs and barely make any difference to much of the industry.

Surely, we can’t call something “Job-Keeper” if your boss can still sack you.

The idea of JobKeeper is not rocket science – it keeps people employed. Taxpayer dollars go to businesses but on the condition that they pay the money to the workers who need it.

Keeping people in work is good for the person who keeps their job, their family, the business who keeps their employee, and the economy because the worker can afford to buy dinner, which goes to small businesses who employ other people. And around it goes.

It’s what economists call the “multiplier effect” and it helps explain why sections of the Australian economy are comparatively strong.

Remove the requirement to keep people in work and the cycle stops at the business owner’s wallet.

It is common sense that as the economy begins to recover from the impact of the pandemic, taxpayer support should become more targeted.

But what is the point of a new program of targeted industry assistance that doesn’t find its way into workers’ pockets? And what is the rationale for not requiring businesses receiving taxpayer dollars to keep people in jobs?

If the taxpayer is going to hand over a wad of cash to a big airline, why wouldn’t you put a condition on it that says you need to give some of this money to your workers and you need to keep them employed.

When Treasurer Josh Frydenberg delivered his Budget speech he said: “There is no budget recovery without a jobs recovery.” That logic still holds.

If we allow hundreds of thousands of Australians to fall into the Centrelink queue now, then the collective effort of all Australians to work our way through this pandemic will be largely wasted – because thousands of workers will lose their jobs anyway and the economy will drift backwards, weighed down by high unemployment and low consumer spending.

Among the one million Australians who will be left in the lurch by the Federal Government’s decision to axe Job-Keeper in favour of corporate welfare are those who were hit first by the pandemic, hit the hardest and hit the longest – the airlines and wider aviation industry. In a recent survey of aviation workers, 78 per cent were reliant on Job-Keeper and the vast majority were relying on cash from liquidating assets or deferring bills.

More than four in 10 had accessed their super early, 41 per cent had deferred school fees and other expenses and half were struggling to pay their mortgage or rent.

The Government is right to have identified aviation as one of a number of industries still suffering and we are at a critically important point where domestic travel has not yet regained full strength — but recovery is on the horizon as the vaccine rolls out.

If the Government prematurely axes JobKeeper it will hamper the industry’s recovery by reducing its overall capacity so when passenger numbers eventually recover, the industry won’t have the capacity to handle demand. Cutting Job-Keeper will mean fewer workers, fewer flights, less travel and less money flowing into regional and local economies off the back of domestic tourism.

Emeline Gaske is the assistant national secretary of the Australian Services Union, which represents aviation workers.