Corruption is an attack on democracy, quality public services and prosperity

On 9 December we will mark International Day against Corruption. All over the world corruption undermines quality public services, the integrity of its institutions and employees, and equal and fair treatment of citizens.

This item is provided by the PSI 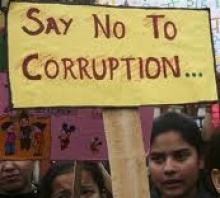 Corruption is an insult to democratic principles, ethical values, justice and the rule of law. It jeopardizes the stability and security of societies, and is one of the greatest obstacles to a decent and sustainable economic development.

This is why the General Assembly of the United Nations in October 2003 declared 9 December of each year the International Anti-Corruption Day; and this is also why PSI Congress decided in 2012 to launch a long lasting global campaign against corruption as part of its fight for quality public services:

PSI General Secretary Rosa Pavanelli says: "Our affiliates know that corruption has many faces. We don't speak about bribery only, we also fight against many 'legal' forms of corruption, such as donations by rich persons and companies to political parties or networks established by private companies to influence politicians with the aim of obtaining favourable legislation, privatise public services, or providing them with control over parts of the economy and natural resources."

PSI fights corruption by national actions and campaigns of its affiliates all over the world as much as by lobbying inter-governmental organisations in order to implement effective regulations to control corruption, such as a convention that protects the independency of public service employees working in public control and auditing bodies.

Pavanelli reminds the public that "many forms of outsourcing offer great opportunities for corruption", and she calls upon all PSI affiliates to continue their resistance against the privatisation of public services and to struggle for transparent regulations of public procurement and concessions given to private companies for managing water, energy, medical and other services.

Pavanelli emphasises that "PSI considers tax fraud and evasion a particular form of corruption. Only rich people and private companies can use tax havens to steal the property of the community. PSI fights for closing tax havens and for tax justice because societies need the fair share of all to pay for quality public services, for education, health and social care, for clean water and sanitation, energy, housing, transportation, and for a transparent and democratic public administration that equally serve all citizens."

The PSI General Secretary calls upon all affiliated public service unions to use the particular occasion of the International Anti-Corruption Day for public activities in their on-going fight against corruption.

This item is provided by the PSI

The ASU, a PSI affiliate, supports the anti-corruption campaign, especially as it relates to our campaigns against privatisation and the undermining of public services.