China-Australia Free Trade Agreement - not in the national interest

The Australian Services Union along with the ACTU and other unions are opposing a number of aspects of the China-Australia Free Trade Agreement (ChAFTA). The Agreement is yet to be passed by the Australian Parliament, although it has already been signed by the Federal Minister for Trade and Investment Andrew Robb. In addition to unions, other community based organisations, fair trade groups and other sections of civil society have expressed strong opposition to the ChAFTA for various reasons. 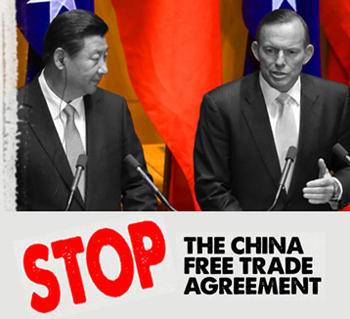 The ASU has lodged a submission with the Senate Inquiry examining the ChAFTA. We make it clear in our submission that the ASU does not oppose trade agreements with China or any other country but we argue that in its current form, the ChAFTA is not in the national interest.

>> Email your MP about the ChAFTA

Lack of transparency during negotiations

The trade agreement process arriving at the ChAFTA was secret and undemocratic. Such agreements are legally binding on governments and can have far reaching impacts, yet the Federal Government did not allow for effective Parliamentary debate of the contents prior to the agreement being signed.

Prior to the signing of the agreement, community organisations, unions and other sections of civil society had to scramble around trying to obtain information about the contents from media leaks and scant briefings by Government departments. Whilst the agreement process locked out civil society, it will give preferential treatment to global corporations and foreign companies (through ISDS provisions).

After the agreement was signed, unions and community organisations have now been able to assess more definitely what impact it would have on workers, their families, their communities, services and the environment. The picture is not good.

The ChAFTA allows investors with projects of over $150 million with 15%-50% Chinese ownership, to employ temporary migrant workers. There is no guarantee that local workers in Australia will be given preference for jobs through what is referred to as "market testing". This is despite increasing unemployment and a decline in apprenticeships in Australia.

Australian Services Union members are not immune from the potential adverse effects of the ChAFTA. For example in local government, energy and water, local workers in ASU areas may be replaced by an overseas workforce in major projects worth over $150million, such as regional road construction and maintenance, building electricity substations, and water infrastructure construction.

Australia is a signatory to a number of United Nations Conventions and International Labour Organisation Conventions relating to the ability to join free independent unions, the right to organise as well as issues relating to safety and fairness. However, labour rights and legal arrangements in China are not the same as they are in Australia so the parties are not on a level playing field. The investor can bring in lower-skilled overseas workers, with lower-level language skills and lower wages than usually required under the standard visa program.

There are inevitable concerns that without adequate safeguards, workers brought to Australia on work visas will be vulnerable to exploitation while simultaneously putting downward pressure on wages and conditions of local workers.

The agreement is likely to have a considerable impact on technical and trade areas and in industries such as mining, construction and energy areas.

Due to the potential far-reaching and detrimental impacts of the ChAFTA, the ASU and other unions are demanding:

The ASU has a long history of working with communities to demand a better deal for workers and local communities. We encourage people to speak up and let the Government know it is going down the wrong direction by undermining Australian standards and commitments.

The ISDS threat to Australian sovereignty

Another key issue of concern relates to the inclusion of Investor State Dispute Settlement (ISDS) provisions. ISDS allows investors to sue the Australian Government if their investment is harmed by domestic law or policy. This effectively puts the profits of foreign investors above Australia's national interest. It can put their profits ahead of our safety requirements, environmental protection regulations and other legal and policy commitments which have been developed to safeguard our people and the environment. In this way, ISDS undermines Australian sovereignty!

Global experience of the use of ISDS provisions has indicated the readiness of wealthy corporations to use ISDS provisions against the interests of communities and nation states. The efforts of the Philip Morris Tobacco Company in suing Australia (and Uruguay) over tobacco packaging regulation is an example recently reported in the media, eg Tobacco giant sues Australia.

The ASU is of the view that citizens and their governments have a right to determine how best to safeguard public health and it should not be over-ridden by the interests of powerful foreign companies.

As noted in the ASU submission to the Senate, the inclusion of ISDS provisions in a free trade agreement (whether it is with China or any other nation) sends a signal to the local community that the current Abbott Federal Government is prepared to put foreign company interests ahead of the interests of its own people and the national wealth.

The ChAFTA is just not good enough

"We need to let the Government know that it is going the wrong way with this one."

>> Email your MP about the ChAFTA

We don't want to allow any trade agreements to undermine our future or the future of other workers - we will fight for fair trade.

Help spread the word about ChAFTA

You can download materials to help spread the word here:

For more information about ISDS, ABC Radio National produced a background briefing that provides more detail: "ISDS: The devil in the trade deal" 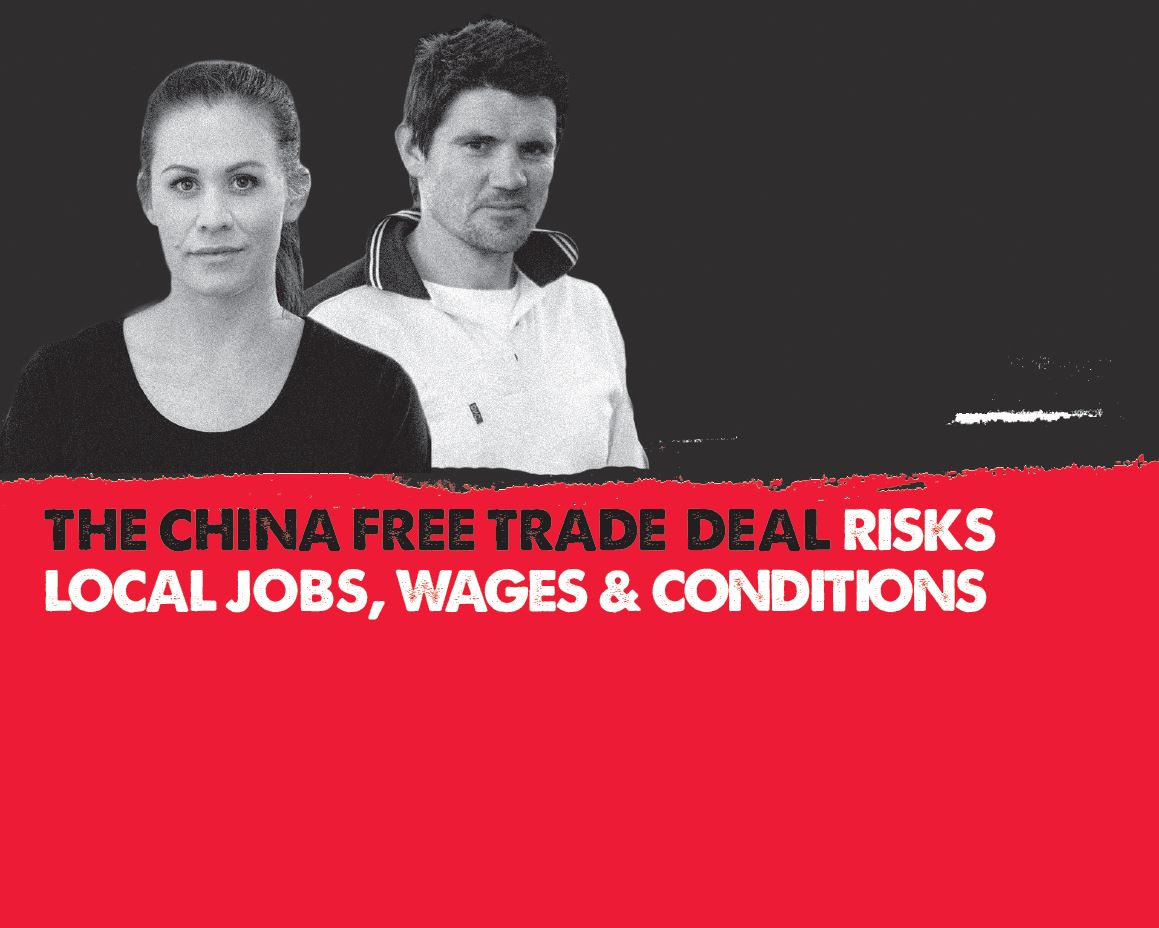 Dr Howe also provides a series of recommendations on how the ChAFTA can be improved without renegotiating the terms of the agreement itself.

You can read a one page summary of Dr Howe's findings in this ASU factsheet.

The report was commissioned by the ETU (see the ETU media release here) but the Union had no editorial input in the report. Click here to download the full report.

The Impact of the China-Australia Free Trade Agreement on Australian job opportunities, wages and conditions