The community has been told over many years that outsourcing council work results in savings that the community benefits from. However, yet another independent report has revealed those savings to be "often illusory" and the exercise accompanied by "a host of unforseen problems". In the wake of these findings (that add to a growing body of research questioning the benefits of privatisation) the ASU calls once again for the return and retention of council work to the in-house workforce. 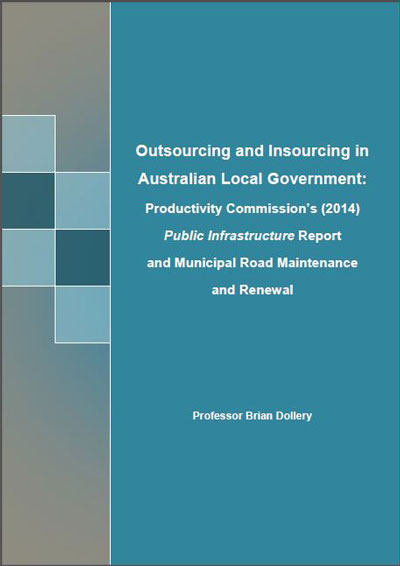 "The ASU commissioned this important and independent study to examine our belief that, on balance, road work performed by in-house employees as opposed to contractors is far better for local communities from the point of view of quality, reliability, skills enhancement, job creation and local community economic sustainability," said ASU Assistant National Secretary Greg McLean.

Although the report, by Professor Brian Dollery "Outsourcing and Insourcing in Australian Local Government: Productivity Commission's (2014) - Public Infrastructure Report and Municipal Road Maintenance and Renewal" focusses on one part of council operations, the conclusions are applicable to the entire outsourcing adventure we've seen over the last 20 years in Australia.

On a purely cost basis, outsourcing or contracting out (both terms are equivalent to privatisation) has not delivered on the extravagant predictions conveyed to the community. It's not surprising given that those predictions often originated with the large companies vying for the work – hardly a trustworthy source of impartial advice!

Professor Dollery also examined how outsourcing particularly affects small regional, rural and remote communities, given that the local council is often the largest employer and source of economic activity in those areas. Not surprisingly, and as we predicted would happen, these smaller communities have been devastated by outsourcing and their sustainability has been "severely undermined".

It's not difficult to see that when large companies come in to take over work, many of them multinationals, the result is locals losing jobs - and this has a terrible domino effect on small communities.

Does "insourcing" or returning work to the in-house workforce make things better?

Dollery's research indicates that yes, it does: "Empirical work on the performance of insourcing has demonstrated that it is not only often more cost effective than outsourcing, but that it also often generates higher quality and more consistent services, especially where the complexity of service delivery is difficult to manage and monitor efficaciously."

"The ASU will be asking all local government councillors across the country to read this report before making any decisions around whether or not to use directly employed (in-house) staff," Greg McLean said.

"I would think any council that contracted out its road construction and maintenance works after reading this report would not be balancing the best and long term interests of their communities, as it clearly confirms that councils should be building roads with their own workforce, not contracting out the function."

Efforts to impose widespread outsourcing on local government in Australia should thus be resisted, especially in non-metropolitan local government areas. Accordingly, current efforts to enforce the outsourcing of road maintenance and renewal across Australia, such as the Productivity Commission's Public Infrastructure Final Report, released on 14 July 2014, which will adversely affect local authorities, should not proceed.

It is time that Australian governments at all levels, federal, state/territory and local, looked beyond the glossy surface of privatisation to see the harm it delivers to our communities. When they do that, they will have no choice other than to start a wave of insourcing – and it won't be too soon in the ASU's view.

Following a media report by the ABC in September, Greg McLean also noted, "The ASU was pleased to see more independent information recently, this time from the regional ABC news service, that confirmed a number of things, including that it is half the price in some states to use local government road construction and the call by local mayors to give road construction work to local government rather than non-industry contractors."

"It's also great to see a mayor note the connection between local jobs and the local community."

"While the example in the ABC news item is a comparison between Western Australia, Queensland and the Northern Territory, it shows clearly what can happen when councils don't have, or no longer have, the equipment to do their own work, and only the contractors have the equipment. It's a reminder to local government officials that they need to keep councils viable enough to do their own work, build their own roads, otherwise they will be faced with these kinds of developments with no way back," concluded Greg McLean.