The Abbott Government is considering a plan to cut the minimum wage every year for ten years which would have catastrophic consequences for Australia's lowest paid workers. 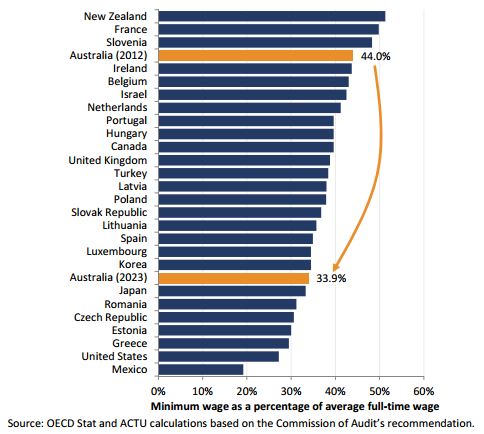 ACTU President Ged Kearney that striking new analysis by the ACTU showed that the plan to aggressively drive down the minimum wage would see its real value fall to it's 1998 level - that's a quarter of a century with no real wage gain for low paid workers.

"What sort of Government thinks it is a good idea to savagely cut the already unacceptably low wages of the lowest paid workers in our community," Ms Kearney said.

"Under the plan being considered by the Government, Australia's minimum wage will be reduced to 44% of average weekly earnings, wiping off $136 per week in today's dollars, taking the minimum wage down to around $480 per week, or just $12 per hour.

"Within only two to three years, Australia's minimum wage would be lower than Britain and Canada's as a proportion of the average wage leaving Australia's 1.5 million lowest paid workers substantially worse off.

"By 2023, after ten consecutive years of real wage cuts, Australia's minimum wage would be one of the lowest in the OECD.

"This is a recipe straight out of the United States - pushing down the minimum wage, getting rid of decent health services and privatising core Government services.

"This radical move represents the biggest attack on Australian wages since the Great depression and would entrench a 'US style' working poor in Australia.

"Australians are emphatic, we do not want a US style underclass of working poor in this country.

"We want a country that gives everyone a fair go and gives everyone dignity and a right to a reasonable and decent quality of living. That's the Australian way.

"Australia is a high cost country to live in and for low paid workers it's getting harder and harder to get by.

"The changes being considered by the Government prove they don't understand how tough it is for low paid workers."

Ms Kearney said the attack on the minimum wage was an ambush by the Government and the business lobby who will stop at nothing to cut workers wages in this country.

"The business lobby was asked by the Prime Minister to make recommendations on the Federal budget, instead, out of nowhere they've come up with an aggressive and alarming plan to cut the wages of Australia's lowest paid, every year for ten years, Ms Kearney said.

"This is nothing other than a scandalous ambush that, for the first time in the 107 year history of Australian minimum wages will see these wages be set by the Government of the day, turning minimum wages into political football.

"In countries like the United States where the minimum wage is set by politicians, the typical experience is that the minimum wage stagnates for years, punctuated by irregular increases, a situation that is bad for workers who see their real wages fall year after year and its bad for employers who have to adjust to one off increases in wages.

"This radical proposal to Americanise Australia's labour market should be firmly rejected.

"The big business strategy is clear - if you bust apart the wages safety net you can drive everyone's wages down.

Minimum full-time wage as a percentage of the average full-time wage in OECD countries - see image above (Source: OECD Stat and ACTU calculations based on the Commission of Audit's recommendation).

Over that decade, while the Australian minimum wage was being cut, the minimum wage may rise in other OECD countries (as it has in most over the past decade), which would make these comparisons even worse.

2014 ACTU Report: Paying the Price - The Commission of Audit’s plan to cut the wages of Australia’s lowest paid workers