Today’s announcement of an increase of 3.3% to minimum award wages does not meet the principle that a full time worker in Australia should not have to live in poverty. The Fair Work Commission (FWC) recognised its failure to achieve this in its Annual Wage Review Statement but the ASU does not accept its justification. The decision affects over 2.3 million Australian workers who are reliant on minimum award rates of pay – and although this is the highest increase awarded in five years, low paid workers will have little joy from it. 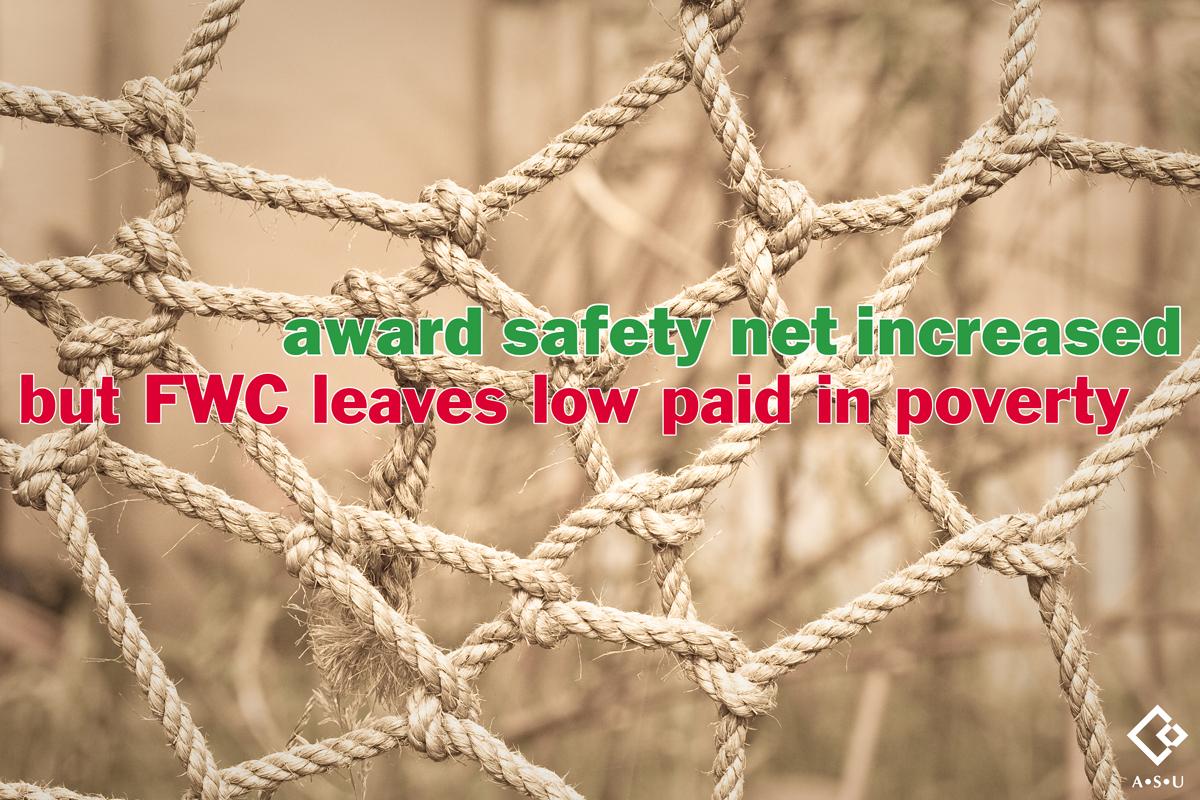 “No full time Australian worker should face poverty – that’s a principle that the ASU holds to and no justification can challenge it,” said Acting National Secretary Robert Potter.

“The union movement’s submission to the FWC made a compelling case for a larger increase and although this decision is better than many in recent years, we wonder what the FWC would have handed down in the absence of a union campaign for a major increase.”

“Australian workers need a better deal and the best way for them to get it is to join their union!” said Robert Potter.

The union movement lodged a submission for a $45 per week increase in minimum wages, but today’s decision has awarded a 3.3% increase to minimum award rates, which amounts to $22.20 per week in the National Minimum Wage – less than half our claim.

“That is not enough to raise people out of poverty in our country!” said ACTU Secretary Sally McManus who attended today’s hearing that handed down the decision.

In fact, the FWC recognised that their decision on minimum wages leaves low paid Australian workers in poverty:

“In previous Reviews, the Panel has accepted that if the low paid are forced to live in poverty then their needs are not being met and that those in full-time employment can reasonably expect a standard of living that exceeds poverty levels. While we have not departed from that position, we acknowledge that the increase we propose to award will not lift all award-reliant employees out of poverty, particularly those households with dependent children and a single-wage earner.”

We don’t believe worker poverty can ever be justified, and definitely not in an environment where company profits are rapidly rising, corporate tax rates are about to be cut dramatically, tax evasion and avoidance by corporations and rich individuals are being revealed all the time, wage theft scandals are rife.

“Australian workers are carrying our country’s economy while their wages stagnate but companies use all the resources at their disposal to find loopholes to rip off their workforce, as the ASU testified at the recent Senate Inquiry hearing into corporate avoidance of the workplace laws,” added Robert Potter.

“If there was any time in history where Australians needed a decent pay rise it is now. If Prime Minister Malcolm Turnbull is not worried about working Australians living in poverty and at the same time facing penalty rates cuts, he has a dangerous blind spot.”

“The Fair Work Commission today made a decision to keep working people in poverty.”

“It is now urgent that Australians’ wages are increased given wage growth in Australia is at a 76-year low, company profits are soaring, Treasury has banked on pay rises of 3.75%, the cost of living is rising and 700,000 people are about to get a penalty rate cut.”

“If our current rules can’t deliver a decent pay rise, then they need to change.”

“The only way that workers can guarantee wage increases and secure employment is to join a union and change the rules.”

Not yet a member? Join today!

We win better pay and better lives when we stand together. That’s what being a union member is all about.

When profits eat wages we all pay the price, by Ross Gittins, Fairfax, 5 June 2017