The ACTU is calling for the minimum wage to be raised to the level of a living wage, on which a low-paid worker could support themselves and their family, after ABS figures released last week show that soaring cost of living is driving millions of workers into poverty. 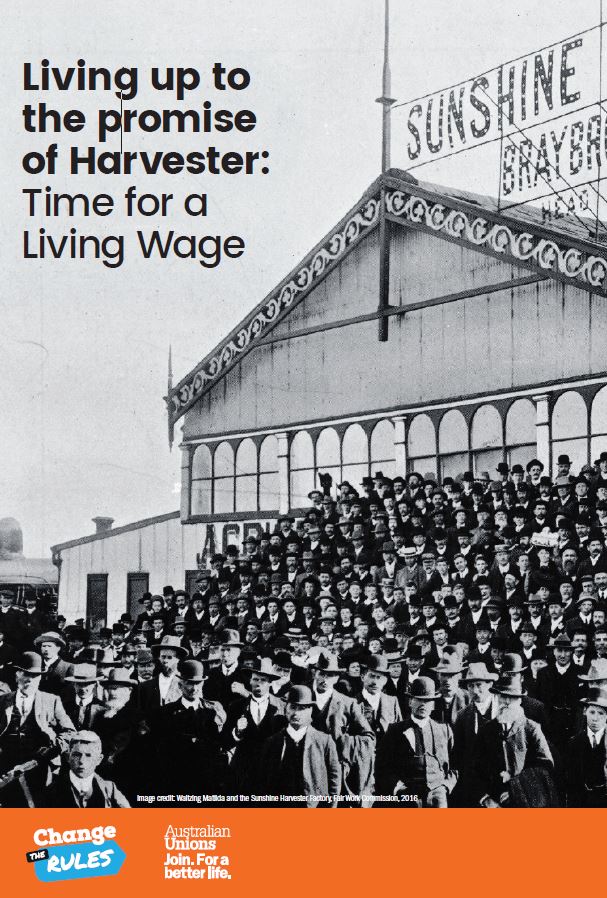 ACTU Secretary Sally McManus will give a major speech on the 110 year anniversary of the landmark Harvester decision on Thursday night, and release a new report “Living up to the promise of Harvester: Time for a Living Wage” which argues for all people to be paid a living wage, as part of the campaign to Change The Rules for working people.

The Harvester judgement, a seminal moment in Australian history, stated that all Australians deserve to be paid a wage that they can afford to survive on. The report and the speech shows how.

A breakdown of official ABS data released by the ACTU in this report show a cost of living crisis, with the following increases over the last year compared to the rate of inflation:

A living wage must be sufficient to ensure that all working people are able to afford rent in a suitable dwelling, a healthy diet, a good quality education, healthcare, transport, electricity and other energy costs, adequate clothing, entertainment and a contingency for unexpected expenses.

The current minimum wage leaves 3 million people in Australia below the poverty line. The promise of the Harvester Judgement, which established the principle of a living wage in Australia, has been completely eroded by decades of neo-liberal policies.

Today the Fair Work Act has the minimum wage set a by a panel of experts looking at a set of criteria only one small part of which is the needs of the low paid.

The 2017 minimum wage decision included an acknowledgement that the new rate would still leave many full time workers in poverty.

“When millions of working people have fallen into poverty, Australia needs a pay rise.

“The figures from the ABS show that rather than getting better, everything is getting more expensive and wages aren’t keeping up. The government is failing working people.

“The promise of Harvester was financial security for working people, not barely keeping from starving and making endless sacrifices to keep the lights on.”

“The minimum wage is leaving millions in poverty. No one should live in poverty in Australia.”

“The decline of our minimum wage is clear proof that the rules that once made Australian workplaces fair are broken.”

“We are rapidly moving towards the creation of an American-style working poor. A class of people who barely keep their heads above water, despite working full time, sometimes in multiple jobs.”