Shared services between the public and private sector, "Public Private Partnerships" (PPPs), or leasing or selling public services or assets to the private sector – these are all different names for privatisation in Australia. Under the title of PPPs, a new international report released today adds to the steadily growing pile of research showing that whatever the name, privatisation does not deliver for the community. 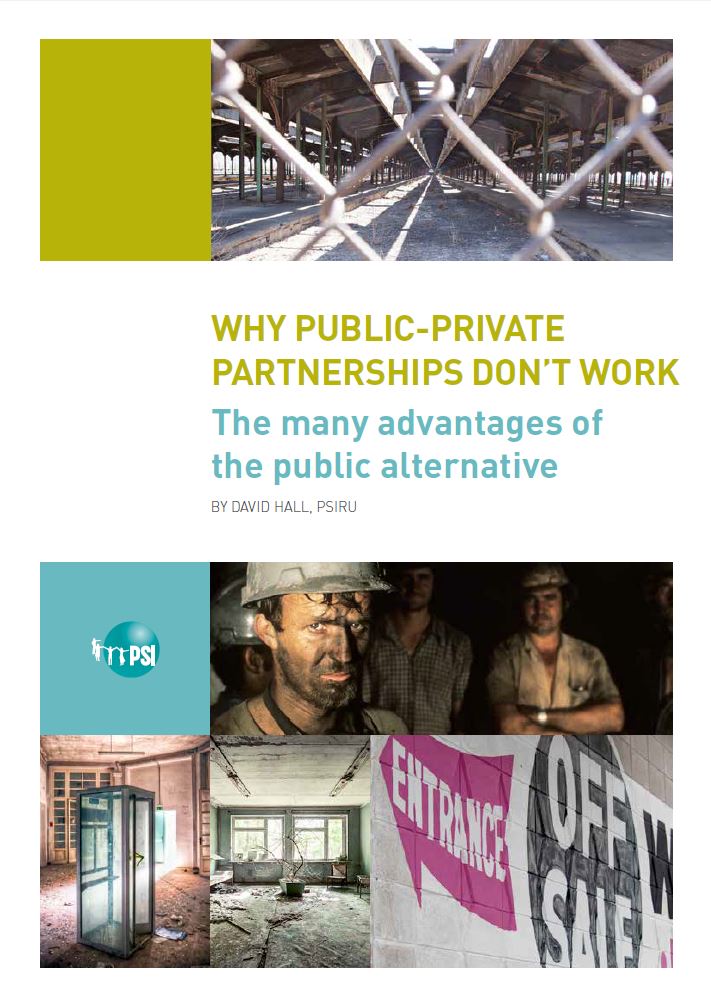 The ASU has been campaigning against privatisation in its many guises for many years, including commissioning research to encourage governments to make better decisions with the public good at the heart of them. More recently, research has been able to examine extensive patterns of privatisation over long periods of time, thus adding to the weight of evidence against moving public services and assets into private hands.

The new report from Public Services International (PSI) released today, "Why Public-Private-Partnerships don't work: The many advantages of the public alternative",  will play an important part in this debate (download below).

"We welcome this new report from PSI and it will form part of our resources to fight privatisation in Australia," said ASU Assistant National Secretary Greg McLean.

"This high level and independent report from academic David Hall, who I know has visited Australia a number of times and is familiar with our experience, is tremendous support for the ASU to receive for our work, as it has independently arrived at the same outcomes: that privatisation does not deliver the promised benefits."

The report assesses the experience of privatisation in both industrialised and developing countries and contains a combination of 30 years of research by David Hall, who is a former Director of Public Services International Research Unit (PSIRU) at the University of Greenwich in the United Kingdom.

The many case studies analysed show that privatisation has failed to live up to its promise. In most cases, it is an expensive and inefficient way of financing infrastructure and services, since it conceals public borrowing, while providing long-term state guarantees for profits to private companies.

"The report is very timely with privatisation having been such a significant factor in the Queensland election with the Newman Government's dramatic loss and currently in the NSW election campaign – politicians need to prick up their ears and listen," said Greg McLean.

Voters are becoming much more informed about matters such as the ownership of public assets and the implications of selling those assets. They understand how revenue from publically owned utilities, for example, is used to fund community services, education, hospitals, etc.

The public now asks questions about asset sales and they see that short term gains that one Government may get don't compare favourably to the long term benefits of retaining assets and the revenue streams they generate for the relevant community.

Privatisation is no longer done in private! The recent election results have sent a loud and clear message that Australians want a say about who provides our public services.

Australian affiliates of the global union federation, Public Services International (PSI), have welcomed a timely global report which outlines why the privatisation of public assets and services is fundamentally flawed.

The report 'Why Public-Private Partnerships (PPPs) don't work' by Public Services International Research Unit (PSIRU) assesses the experience of PPPs in countries both rich and poor.

According to the report, there is a contradiction between the euphoria surrounding so-called PPPs and the poor performance these instruments have offered in the past 30 years.

Many governments are still turning to PPPs in the hope that the private sector will finance public infrastructure and public services. However, experience with PPPs shows that privatisation is a fundamentally flawed mechanism.

"We must remember that private sector corporations need to maximise profits if they are to survive. This is incompatible with ensuring universal access to quality public services, especially for those unable to pay these profits," said Rosa Pavanelli, General Secretary of PSI.

Historically, countries including New Zealand, Australia, Canada and the USA all began using PPPs as a way to balance government budgets by concealing borrowing, to shrink the size of governments and to reward corporate supporters.

"We at the ASU have seen first-hand the devastation done to communities when you take jobs away with privatisation, like Jeff Kennett did in Victoria, and the many years of rebuilding needed after he lost government," said Mr Mclean.

"We are seeing the same in NSW through the Liberal and Nationals as they push privatisation of essential services and the forced mergers of communities in Local Government."

"Members of the ASU are very proud of the public services they provide, from water and electricity services, public transport, local government and more. They and their communities know jobs and services will go with less money invested back in the communities if essential public services are privatised, as Professor Hall points out.

"Once public services are privatised, they are gone. Just on this one occasion 'Vote NO' to those that support privatising what you own, for you and your children's future," Mr Mclean said.

Steve Butler, Secretary of the ETU said: "The people of NSW are sick and tired of their elected representatives choosing the easy option to sell off profitable public assets and essential government services."

"The ETU have stood up to represent the overwhelming majority of people in our community who believe that essential services like electricity should be owned by the people and run by the government to benefit all residents."

"Selling public assets and privatising government services, be they electricity, water, hospitals, disability services or the amalgamation of local councils, is nothing more than a short sighted money grab that will damage the NSW budget by removing long term and stable income streams that help to fund other public services."

"Privatisation is economically, socially and morally wrong" he said.

Assistant General Secretary of the NSWNMA, Judith Kiejda, said it was disappointing to see a return of the failed PPP model being forced into the delivery of healthcare in NSW.

"It's clear the NSW Liberal-National Coalition has an ideological commitment to involve the private sector in the delivery of healthcare," Ms Kiejda said.

"In the space of one term in office, the Liberal-Nationals have begun privatising sub-acute and mental health rehabilitation services and new palliative care services. Disability services will cease to be government-run by 2018."

"A PPP contract has been signed for the new Northern Beaches hospital for a minimum of 20 years with private operator, Healthscope. All services will be delivered by the private corporation. The government will subsidise Healthscope to the tune of $600 million to build the hospital and then pay them for services provided to public patients.

Anne Gardiner, General Secretary of PSA of NSW said: "It's not just the privatisation of the electricity network that people in NSW should be concerned about. This Government is currently outsourcing more and more essential public services like disability care, public housing and even human resources and finance functions."

The PSIRU report proposes a public alternative to this system, in which national and local governments can continue to develop infrastructure by using public finance for investment, and public sector organisations to deliver the service. This gives the public sector a number of advantages.

The public sector gains greater flexibility, control, and comparative efficiency – because of reduced transaction costs and contract uncertainty, as well as economies of scale – and the efficiency gains of more democratic accountability.

"Public services are massive pools of potential corporate profit, and PPPs serve to access them. The 'clients' are captive, the services are often monopoly," said David Boys, Deputy General Secretary of PSI.

A copy of the report 'Why Public-Private Partnerships don't work' can be found online here.