Australian Unions will today launch a campaign to 'Save Our Weekend' and protect penalty rates for thousands of workers in the Geelong, Colac and Surf Coast regions. 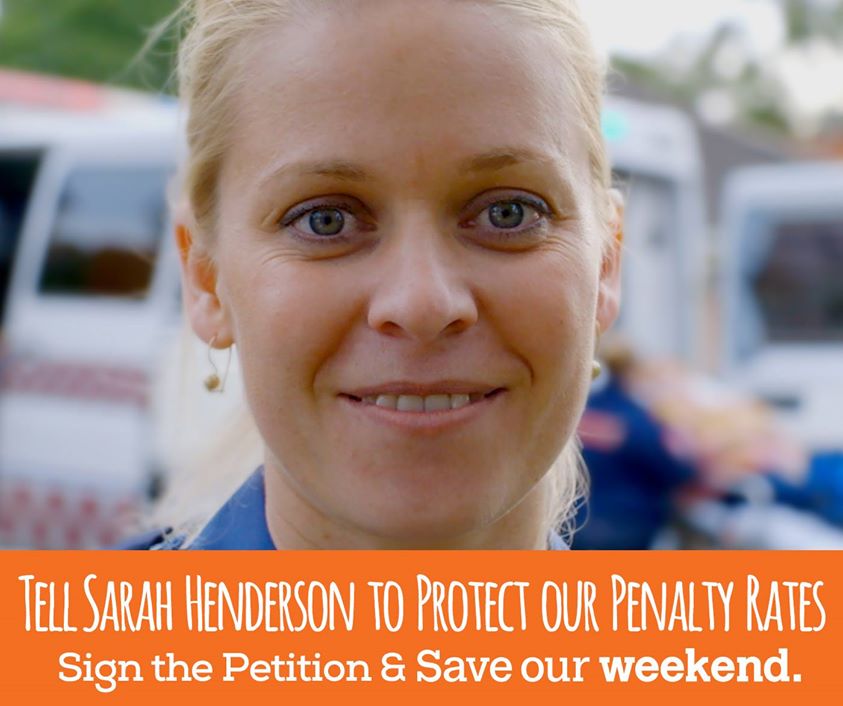 Around 100 people will gather at the Geelong Trades Hall Council to launch the campaign.

>> Show your support for weekend rates by signing the online petition

Over the next two weeks, weekend workers including nurses, paramedics, cleaners and hospitality staff will be door knocking homes, holding rallies and community events throughout the region to encourage people to support the campaign and help protect their wages.

The local campaign comes at the same time as the local Geelong Chamber of Commerce (GCC) has called for penalty rates to be cut for thousands of local workers in its submission to the Productivity Commission inquiry into the Workplace Relations Framework.

Geelong's economy has already been hit hard by thousands of job losses in the manufacturing sector and cutting penalty rates will not just mean that thousands more Geelong residents will have less money to spend in local businesses but it will also see families struggle to make ends meet.

People can show their support for weekend rates by clicking here to sign the online petition.

The following can be attributed to ACTU President Ged Kearney:

"Nurses, police, ambos, miners, retail and hospitality workers are among the hardworking Australians who sacrifice their weekends away from family and friends.

"They work nights and weekends and should be paid for that – but the Abbott Government is working hand in glove with business groups to cut penalty rates and lower take home pays.

"I call on the local community to get behind this local campaign to save our weekends and I call on all local Members of Parliament to guarantee their support for penalty rates.

"The truth is that cutting penalty rates has nothing to do with job creation or productivity - it is about cutting people's pay packets.

"If you cut people's wages, they have less money to spend in shops, pharmacies and cafes – the very businesses that are driving this attack.

"The GCC should know that paying penalty rates benefits local businesses as the income is spent by workers and their families in these very businesses – taking away that income would be a massive own goal."