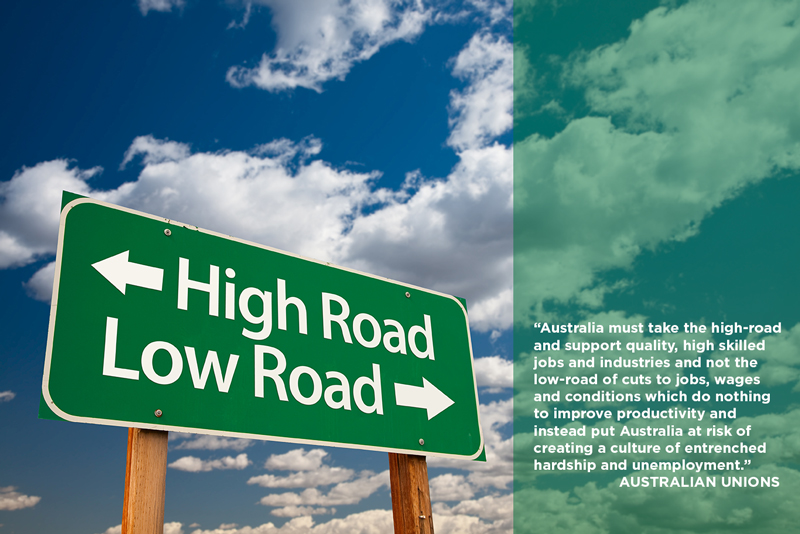 Australia must take the high-road and support quality, high skilled jobs and industries and not the low-road of cuts to jobs, wages and conditions which do nothing to improve productivity and instead put Australia at risk of creating a culture of entrenched hardship and unemployment.

The Government's announcement touted 'collaboration' as the key however while there was ample mention of business, the workers pivotal to these new industries were barely mentioned.

Unions also have concerns about proposals for capital gains tax exemptions being rorted, changes to bankruptcy rules which could leave workers and creditors out of pocket and, rather than a focus on overseas worker visas, we should be developing our local skilled workforce.

Questions have arisen about Treasurer Scott Morrison's comments that other cuts will fund this investment; we need to know where these cuts will come from.

"We welcome the Government's decision to return funding to the research and development sector, which the Abbott Government ripped out of institutions like the CSIRO."

"The return of $1 billion goes some way to repairing the damage following the 2014 federal budget which saw spending on science and innovation - as a proportion of GDP - fall to a level below that in 1979."

"Investment in research and development is the keystone to productivity and ensures Australia has the capabilities required to create new industries and jobs long into the future."

"The union movement supports the high road approach to reform and seizing of opportunities in the new economy."

"Business and profits must not be put ahead of workplace fairness. Workers will be major contributors within these new industries and the new economy and they must benefit accordingly."