A coalition of civil society groups, led by Australian Council of Trade Unions President Ged Kearney and spanning the aid, women’s, environment and social service sectors, as well as unions, have come together to urge the Federal Government to deliver a Budget that protects the living standards of all Australians, ensures strong environmental protection and does not abandon the poor or disadvantaged. 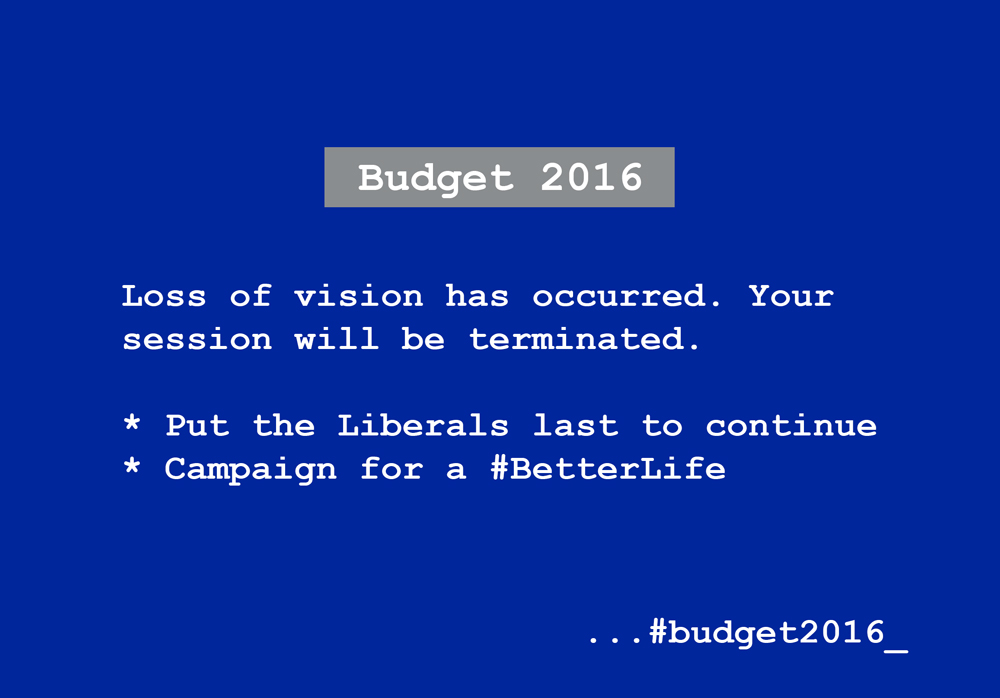 “We demand a better vision than the one the Liberal government has given us so far,” said ACTU President Ged Kearney.

“Corporate tax cuts at the expense of investing in good schools, teachers and a stronger health system is not an acceptable way to run the country.

“We will never accept the fantasy of ‘trickle-down’ logic – the idea that handing over more and more to the top 1 per cent, while cutting the public services and workplace protections that the rest of us rely on – is the route to a strong economy.”

The groups are calling for a different approach to building a strong economy and nation, one that restores funding to social programs and services that lost billions in the 2014-2015 budgets.

Over the next decade, schools and hospitals will lose over $80 billion as a result of the 2014 Budget. The 2014-2015 budgets also cut $1 billion from vital services for the people in greatest need, such as those experiencing financial crisis or family breakdown, children at risk, vulnerable young people, new mothers and babies, and people facing eviction and homelessness.

This included $500 million cut from Aboriginal and Torres Strait Islander services and programs, and $674 million cut from affordable housing and homelessness programs. Workers’ entitlements such as penalty rates have also come under attack.

“The gap between the richest 1 per cent of Australians and the rest of us is wider than it has been since World War Two,” said Ms Kearney. “We can do better than this. We can build an economy that works for people, not the other way around.”
St Vincent de Paul Society CEO John Falzon said a good Budget would be modelled on the principle of from each according to their ability and to each according to their needs. “A good Budget would be one that does not leave people who are unemployed or insecurely employed, for example, to wage a daily battle for survival from below the poverty line,” he said. “It would ensure that no one misses out on the essentials of life: a place to live, a place to work, a place to learn and a place to heal. A good Budget would reduce, rather than entrench, inequality. A failure to fight inequality is a failure to govern.”

GetUp National Director Paul Oosting said “this is a billionaires budget that pawns off hospital beds and school desks to subsidise the interests of freeloading corporations and polluters. Mr Turnbull has all but confirmed a tax handout for the corporate tax dodgers robbing billions from our economy each year, while the bulk of cuts to our local hospitals and schools look set to remain in place.”

ASU Acting National Secretary Linda White said, "The ASU represents thousands of frontline community workers across Australia whose services have been cut over the last two budgets. Our members are often gagged by Government from speaking out against these cruel cuts. Malcolm Turnbull should reverse the cuts to services like domestic violence support, homelessness refuges and community legal & financial services. Our members do vital work supporting the most vulnerable and marginalised in our community - their work should be supported with more government funding not less, so local services can stay open and keep doing the great work they do."

Marcelle Mogg, CEO of Catholic Social Services Australia said in Australia, more than 600 000 children live below the poverty line, many in welfare dependent families, through no fault of their own. “A priority of this Budget must be to fund policies which enable individuals and families to receive an adequate income to live. Australia is a prosperous nation. No one should be living in poverty,” she said.

Australian Conservation Foundation CEO Kelly O’Shanassy said this budget should set out a plan for clean energy transformation in Australia. “We need a plan that will get our country out of coal and into renewables and help workers through the time of transition,” she said.

Director for Campaign for Australian Aid Tony Milne said the aid budget has been cut by one third in the past two years with devastating consequences for people living in the poorest parts of the world. “We're calling on the Government to cancel the final cut that will take our aid to the lowest level ever. Australian Aid is the contribution Australians make to a fairer and more equal world for everyone,” he said.

Anglicare CEO Kasy Chambers noted that Anglicare members work with more than one in thirty Australians. “The vital issues in this election campaign are affordable housing, secure work and adequate income,” she said. “Australia has a proud culture of equality but this is being sorely tested. This budget must deliver outcomes for the common good, not the benefit of a few if we are not to leave large sections of our community behind.”