New data from the McKell Institute released today shows workers in 45 regional communities will lose $667 million each year from penalty rates cuts, with $289 million of this to leave these electorates altogether to line the pockets of corporations in the cities and overseas. 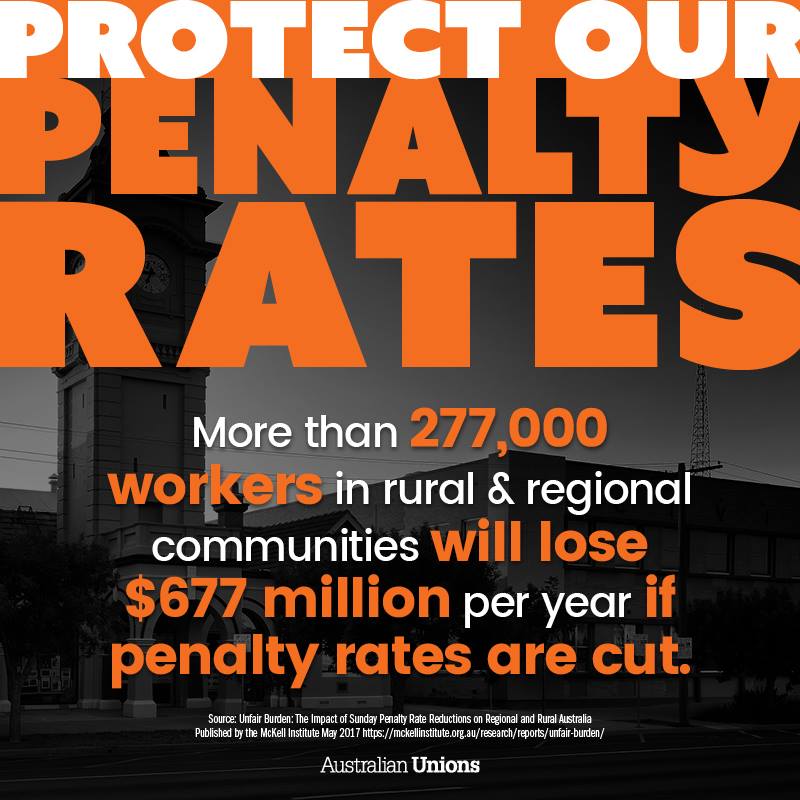 The research shows that more than 277,000 workers in regional communities will be hit by the cut in Sunday penalty rates and much of the savings business owners stand to make will not feed back into the local economy.

The reason for the severe impact on regional and rural communities is due to:

The report identifies the aggregate reduction of disposable income in each rural and regional electorate across Australia, finding that Leichhardt in Queensland is set to lose the most, with a reduction of up to $21 million in disposable income across the electorate, followed by McEwen in Victoria (approximately $19 million) and Dawson in Queensland (approximately $19 million).

“The Turnbull Government can stop these cuts to penalty rates and we urge them to act to do this before they are due to come in on 1 July. When the Bill comes before Parliament each politician will have to choose – do they put the take home pay of locals first?”

“Working people in regional Australia are already doing it tough. They’re feeling the pinch of high cost of living and flat or falling incomes, and ripping $667 million out of the their pockets is only going to make that worse.”

“Slashing penalty rates is a cut to workers’ take home pay that they can’t afford and don’t deserve and it will mean many people who do work Sundays will be forced to work harder just to stand still.”

“To make it worse, much of the penalty rates cuts go straight to the profits of companies who are not even based regional Australia, but in capital cities or overseas. So much of this money leaves regional communities never to be seen again”