Huge numbers of bank customers and staff trying to reveal the extent of banking malpractice to the Banking Royal Commission are gagged by non-disclosure and confidentiality agreements. This makes it all the more important that everyone who is able to make a submission does so – it can be done easily online. 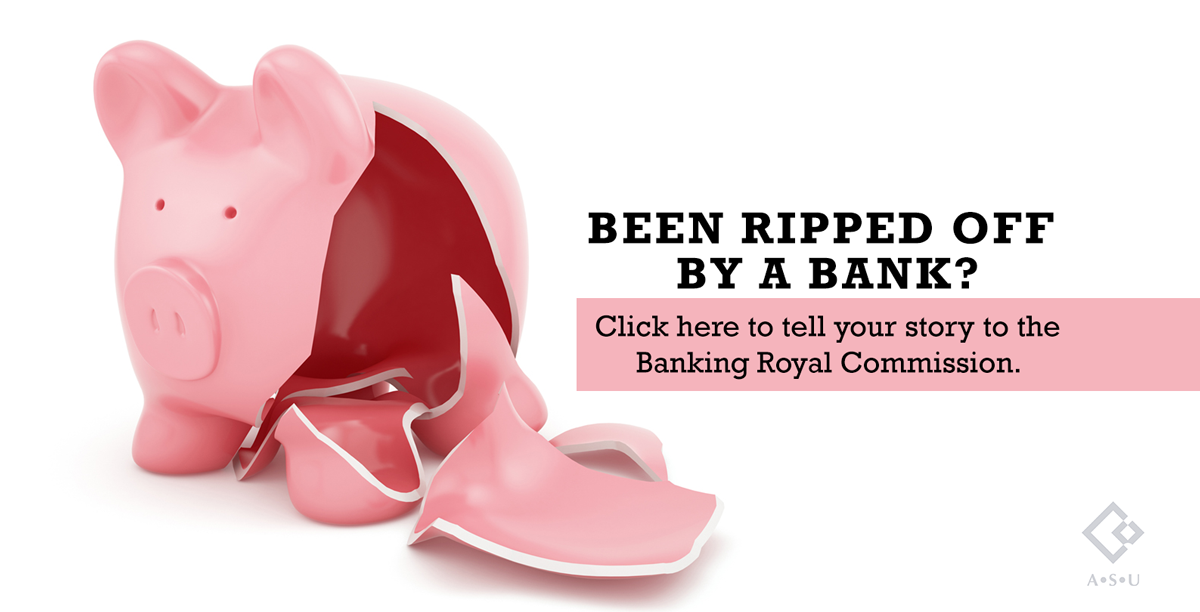 Unlike the institutions at the centre of the Royal Commission into Institutional Responses to Child Sexual Abuse, the Banking Royal Commission has not moved to ensure that banks cannot pursue legal action against people who breach confidentiality and non-disclosure agreements to blow the whistle on wrong-doing inside the banking sector.

The ACTU is calling for the Commissioner Kenneth Hayne to ensure that all witnesses have protection from all non-disclosure, confidentiality and non-disparagement provisions relating to previous settlements by the banks, or included in employment contracts or employer policy.

>> Click here to make an online submission to the Banking Royal Commission.
>> It can be short or long, but everyone's stories are needed!

“We can’t have a comprehensive investigation into our banks unless people are free to reveal to the Royal Commission the extent of the problems they have witnessed or suffered directly,” said ASU National Secretary David Smith.

“There are already too many questions about limitations on the Royal Commission without this one, gagging staff and clients – allowing banks to silence potential critics who would have real evidence to present, would reduce this entire exercise to a farce!” he added.

The ASU already had serious reservations about the terms of reference of the Banking Royal Commission, but the problem of gags cannot be overlooked, it goes to the very core of why the Royal Commission was sought for so long.

We urge ASU supporters who aren’t legally constrained and have a story to tell about their banking experience, whether long or short, to not hesitate in lodging it via the simple online form:

>> Click here to make an online submission to the Banking Royal Commission.
>> It can be short or long, but everyone's stories are needed!

With the Turnbull Federal Government and the banks themselves continuing on their quest to hand your superannuation money over to the for-profit finance industry players, it is crucial to ensure the Royal Commission is made fully aware of the fitness, or otherwise, of those for-profit institutions in handling your retirement future.

“The banks are using non-disclosure and confidentiality agreements to shield themselves from the most damning details of their malpractice.

“These agreements affect people who work for the big banks, and people who have been paid out by the banks for being victims of malpractice. The Royal Commission, and the public, has a right to hear what they have to say.

“The people coming forward to us are talking about predatory lending, misleading and unconscionable financial advice, possibly illegal fees and fraud by the banks, which in many cases has driven people to bankruptcy and to lose homes and businesses.

“The Turnbull Government has already truncated this Commission. We cannot allow large numbers of witnesses to be silenced by the banks.

“None of the infrastructure that was put in place to collect evidence for previous commissions has been mobilised for the Banking Royal Commission. The Turnbull Government is trying to protect its mates and former colleagues in the banking sector.