Qantas mega-profits trickle up... not down

The Australian Services Union today called-out Qantas for their position on corporate tax cuts, saying the company had always pocketed its profits in preference to increasing wages. 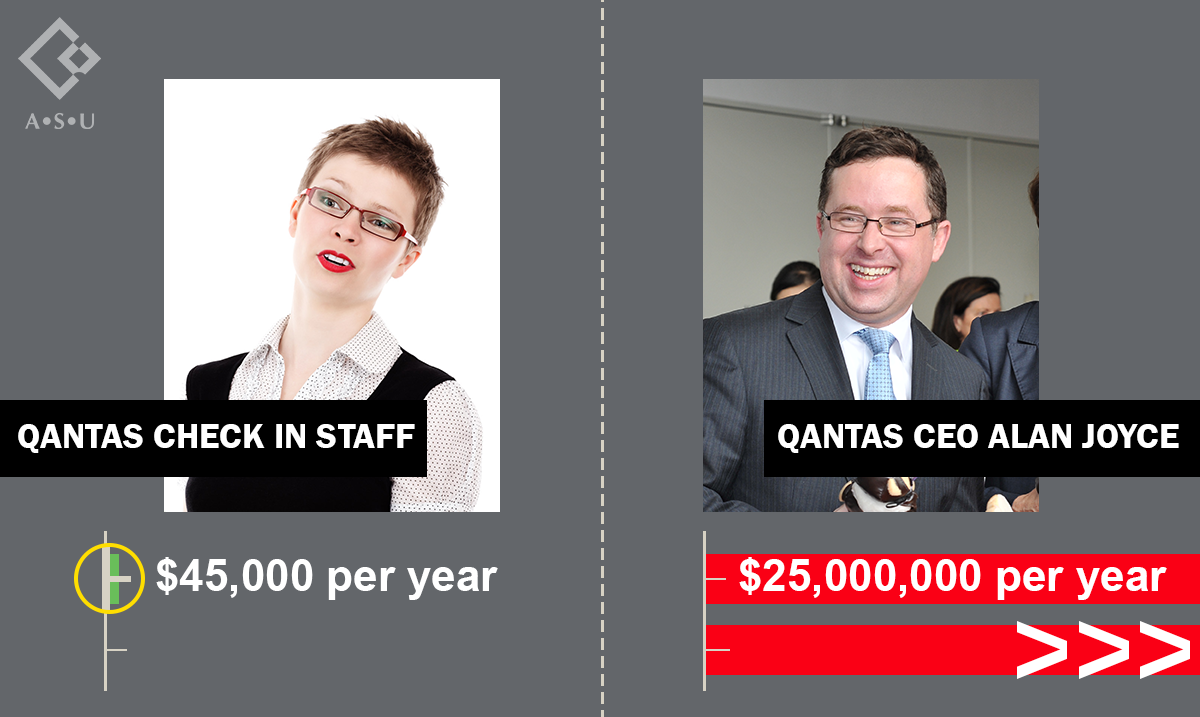 ASU Assistant National Secretary Linda White said during one of the most profitable periods in Qantas’ history it even frozen wages for the past two years while handing over massive Executive salary and bonuses.

“When it comes to company profits, it never trickles down – it always trickles up in the form of higher executive bonuses for the super-rich like Alan Joyce,” Ms White said.

“Qantas workers have seen pay-rises of less than 3 per cent on average over the past decade, and even these were only delivered by fighting hard through their union.

“While many Qantas workers struggle to make ends meet with the increasing cost of living and stagnating wages, we’ve seen the CEO’s salary balloon to almost $100,000 a day – much more than most workers earn in a year.

“We’ve also seen the number of Australians employed in Qantas slashed with 5000 jobs slashed or off-shored in 2014 and another 55 jobs due to be sent to New Zealand this year.

“If we wait for a corporate tax cuts to trickle down to Qantas workers, we’ll be waiting a long, long time.”

Ms White said instead of putting faith in the biggest companies and richest people to hand-over their wealth to working Australians, we instead need to make sure workers have enough power to negotiate decent pay and conditions.

“Our workplace laws are broken, and we need to change the rules to give Australian workers a better deal.”

Ms White also challenged Alan Joyce to tell workers how much will trickle down to them if Government gives Qantas favourable policies like tax cuts.

“If Qantas actually believes a corporate tax cut will benefit their workers, I challenge them to tell us today – how much will the pay rise be?”

ABCnews: There's no case for a corporate tax cut when one in five of Australia's top companies don't pay it (UPDATED LINK TO WEB ARCHIVE), by Emma Alberici, 14 February 2018

THIS ARTICLE WAS REMOVED FROM THE ABC WEBSITE AT SOME POINT ON THURSDAY 15 FEBRUARY - THE ARCHIVED VERSIONS CAN BE FOUND HERE:
WEB ARCHIVE VERSION: There's no case for a corporate tax cut when one in five of Australia's top companies don't pay it

THIS ARTICLE WAS EDITED AFTER PUBLICATION: Headline changed to "Why many big companies don't pay corporate tax" plus numerous other amendments.

The ASU was first alerted to the deletion of the the Alberici article early on Thursday evening by a Twitter supporter. The ASU was quoted in the article via Assistant National Secretary Linda White (which led to Alan Joyce complaining about her on ABC Radio National the next day), so we were keenly interested about what had happened. The following news items follow up the deletion and are very good updates on the corporate tax cuts in general:

We encourage our supporters to read the recent article in The Saturday Paper on the corporate tax cuts - it also examines the deleted Alberici article: Morrison’s pursuit of Trump economics, by Mike Seccombe, 17 February 2018. Seccombe adds to those making the point that there is nothing dramatically new in the arguments Alberici collected in her deleted piece, but indeed that her arguments are:

'In line with a growing body of evidence-based opinion, she concluded that “businesses make decisions about where in the world to park their money based on myriad reasons, possibly least of which is the headline corporate tax rate”.'