Penalty Rates are all about fair compensation

From staffing call centres, libraries and airports to repairing essential services and providing emergency community services, especially after natural disasters, ASU members are working unsociable hours so that others can enjoy their weekends, nights and holidays. They miss out on vital time with friends and family, and deserve to be fairly compensated. For many, that compensation helps to make ends meet. Yet the Federal Government and employer groups are trying to undermine penalty rates that would mean a massive pay cut for millions of ordinary workers, and would take billions out of the economy. With your help, we can stop them!

The attack on our weekend rates 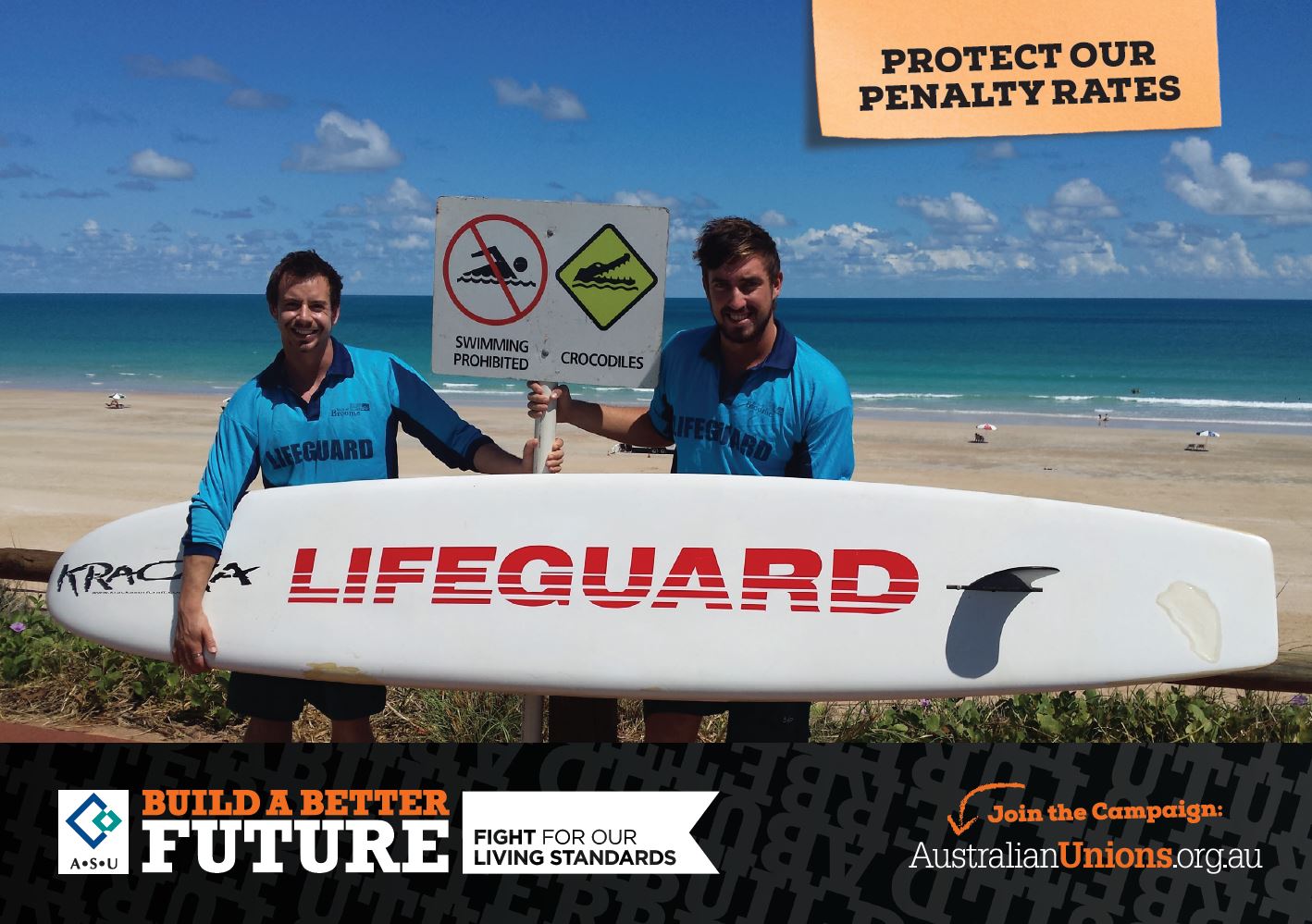 While the Federal Government says it won't go after our penalty rates, it has been trying to do exactly that.

In fact, Prime Minister Malcolm Turnbull has taken a harder line by firmly putting penalty rate cuts back on the table soon after deposing Tony Abbott. Turnbull has claimed penalty rates are a historical relic even though a recent study from the Centre for Work + Life at the University of South Australia disputes this.

The report by Natalie Skinner and Barbara Pocock The Persistent Challenge: Living, Working and Caring in Australia in 2014 forms the Australian Work and Life Index (AWALI), a report prepared for the Federal Government which examines how work intersects with our lives. It found that the so called "24/7 economy" is not what the majority experiences, and working unsociable hours has detrimental impacts on the lives of workers: 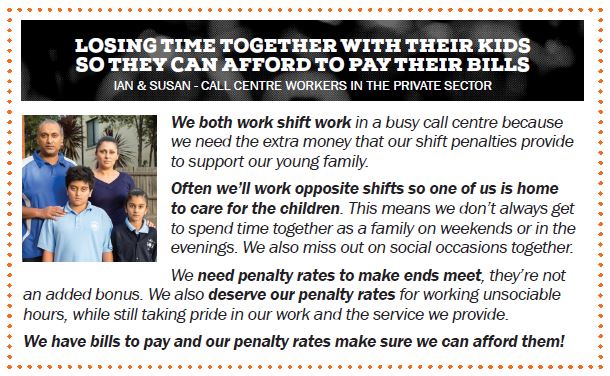 Based on this analysis there is a case for paying workers a premium for Sunday work and for weekend and evening work more generally, given the poorer work-life interference associated with Sunday work.

The current Federal Coalition Government also tried to pass the provisions in the Fair Work (Amendment) Bill which would make it easier for bosses to pressure workers into reducing their penalty rates through individual contracts where bargaining power is unequal (these elements were recently defeated in the Senate after a concerted campaign by unions).

The Federal Government also set up a Productivity Commission Inquiry into workplaces – a platform for big business to go after our rights at work. The Commission's Draft Report recommends cutting penalty rates, just as we had expected it would. 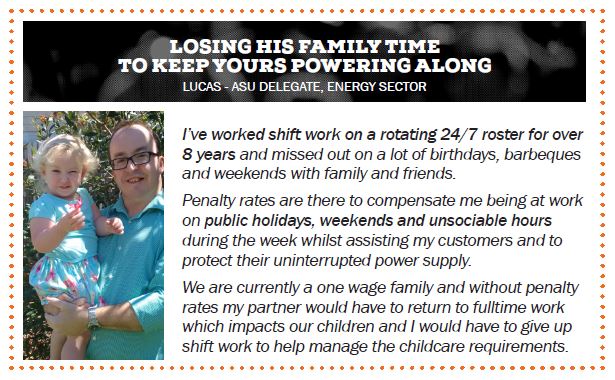 The opponents of penalty rates have tried to justify their position by arguing that savings from cutting penalty rates will create more jobs. Well, apart from the obvious "robbing from Peter to pay Paul" response that comes to mind, unions argue that there's just no evidence to support that position.

During his farewell speech to Parliament, former Treasurer Joe Hockey let the cat out of the bag by declaring that penalty rates are "profit murder", which is exactly what unions have been saying all along: big business wants to cut penalty rates to pocket more profits, it's not about creating more jobs like they have been proclaiming. So please stop accusing workers who are desperately trying to defend their living standards by campaigning to protect penalty rates of preventing new jobs being created!

In fact, the projected overall impact of taking penalty rates out of the economy is overwhelmingly negative. For example, towns in regional NSW would lose up to $111 million if penalty rates were cut according to a recent study by the McKell Institute "Who loses when penalty rates are cut? The economic impact of penalty rate cuts in Australia’s retail and hospitality industries".

The claim that penalty rates are forcing pubs and cafes to close is not backed up by evidence. We are spending more on food and drink than ever before. As a result employment in the sector has grown faster than the rest of the Australian economy since the 1990s. 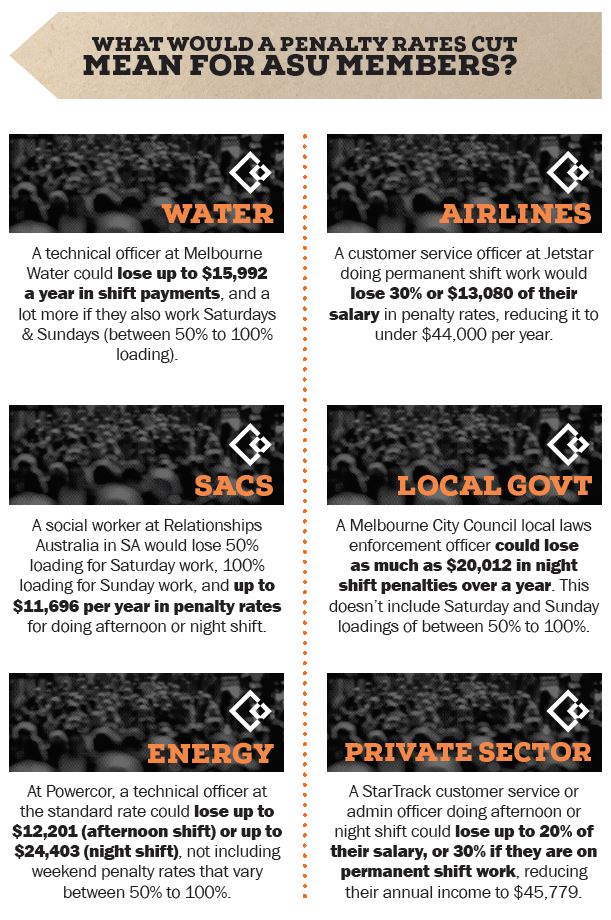 Weekends are as important as they have ever been!

After all, we don't have weddings on a Tuesday morning or kids' soccer on a Thursday afternoon. And your local MP or CEO isn't answering calls on a Sunday.

The AWALI report quoted above indicates that the majority of Australians do not work in the 24/7 economy. It's not surprising that 97% of Australians think that the weekend is important for families (Galaxy Research August 2012) - primary schools, secondary schools, kindergartens, they all run during normal business hours of Monday to Friday. When people are forced to work outside those hours, they are being taken away from valuable family time and should be compensated for that.

And polls frequently show that the vast majority of Australians support a higher rate of pay for working nonstandard hours. Our society values sacrifice by recognising it with fair compensation.

We have penalty rates because members of the Australian Services Union and other unionists fought hard to ensure that workers were fairly rewarded for working difficult hours. With your help, we must fight even harder to protect them.

Are you or your friends getting the right rate of pay? Contact your ASU Branch for advice: www.asu.asn.au/contact