Next week Malcolm Turnbull recalls Parliament to undermine your civil liberties: Australian workers currently have the right to remain silent when interrogated, but under the ABCC, that right and many others will be taken away. ASU members in local government, energy and perhaps others, will be captured by the "building and construction" definitions which give the ABCC its scope but regardless of who is covered, the ABCC is an affront to justice and destroys the cherished principle of equality before the law! 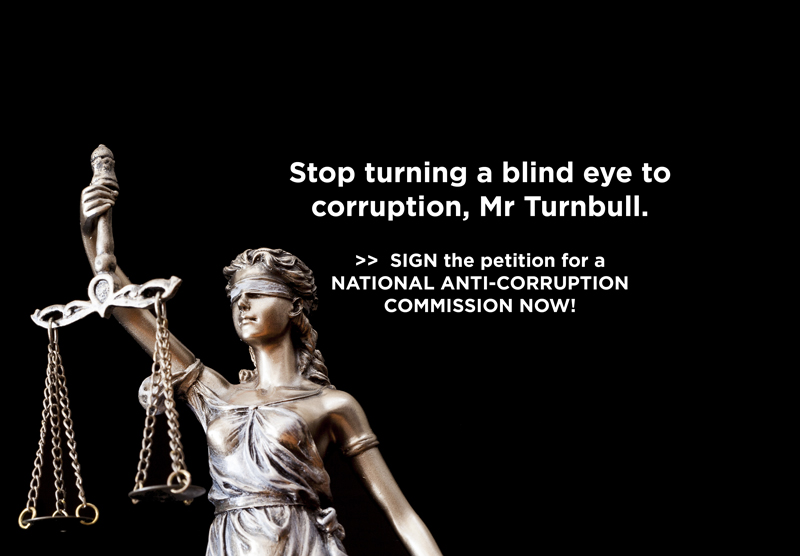 The Law Council of Australia has recommended to the Senate to not pass the ABCC Bills because they go against the Australian rule of law: click here to read their extensive submission in full (it's the Law Council's role to advise govts about improving, not undermining, justice in Australia).

We can influence how next week in Parliament plays out by showing politicians that there is massive community support for fair scrutiny through a national anti-corruption commission and no support for an unjust ABCC.

If Malcolm Turnbull and his Coalition Government are truly worried about corruption, a national, broad-based anti-corruption commission is what they should be introducing, not the ABCC, and that's what many of the cross bench Senators are demanding, too.

Maybe Mr Turnbull is not interested in sharing scrutiny around and revealing corruption wherever it lurks?

ASU alarmed by ABCC infringements on rights of ASU members & other workers, 21 March 2016

We need a net not a spear to deal with corruption in all institutions, 2 February 2016

Background information about the recall of Parliament next week

The purpose of the recall of Parliament next week by Malcolm Turnbull is to give the Coalition a further trigger in the shape of the ABCC Bills for a double dissolution election. Currently, the Bills' existing status as double dissolution triggers is ambiguous at best. Mr Turnbull has been trying to pressure the cross bench Senators into passing the legislation and given their futures as Senators are at stake, we don't know whether they will succumb or continue to fight against the unjust ABCC.

From the ASU's point of view, the ABCC must be fought tooth and nail because the occupational health and safety and civil liberties of workers, including ASU members, are at stake.

In the meantime, public support for the union movement's campaign for a national anti-corruption commission to deal with all corruption, has grown fast and strong. People realise that the ABCC is a politically motivated body intended to target only a small group of Australians, but that a national anti-corruption commission can investigate federal politicians and suspicious activity by other organisations, too, including the building industry - it's really a no brainer about which one should be established!

If the public mood is heightened enough in the lead up to and during the recall of Parliament, especially in light of the banking industry scandals, massive tax avoidance reports by big corporations and super-rich individuals, the Panama Papers, the Unaoil bribery scandal, etc, the Coalition may realise that continuing on their agenda for an ABCC will not win them an election in July, or any time soon.

We must raise the volume on the public's view that corruption anywhere and everywhere must be investigated by a national, independent, broad-based anti-corruption body. This is why we are asking our supporters to sign the petition and we are circulating as much info as we can in a short space of time - to prevent Malcolm Turnbull ignoring the public voice!