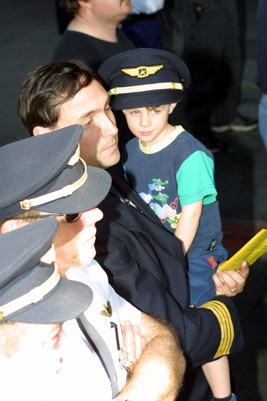 The ASU was the largest union in Ansett with members Australia wide who worked at airports, in cargo, operations, reservations and head office before the airline's final collapse in February 2002. On this page we want to provide information to members on the resources that are available to assist members following the collapse of the Ansett group of companies.

The ASU's news item on the end of administration:

Ansett: a 10 year journey by workers and unions comes to an end

Australian unions will today reflect on a 10 year journey alongside thousands of former employees of Ansett airlines to ensure they received as close to 100% of their entitlements as was possible.

The Ansett fleet was grounded by administrators on 14 September 2001, leading to the demise of the 65-year-old airline and one of the largest corporate collapses in Australian history, impacting on the lives of 15,000 employees.

The ASU was the largest union at Ansett with 4,500 members losing their jobs on that day 10 years ago.

"We'd seen other companies collapse and workers completely ripped off in the process, with years of accumulated entitlements wiped out in one fell swoop," said Linda White, ASU Assistant National Secretary and ASU representative on the Ansett creditors' committee from the very beginning of the process.

"The ASU was committed to ensuring this would not happen to our members at Ansett so we have been involved every step of the way in ensuring their entitlements were met - and we got so close to 100 per cent. We're still reminding our members that there is still a considerable chunk of unclaimed super out there."

From day one, unions worked closely with administrators KordaMentha to extract every cent they could for the workers, a relationship lasting the past decade.

The final dividend payment was made earlier this month, bringing the average payment to 96 cents in the dollar of their entitlements. In total, employees have received $727.5 million in 14 payments.

"The collapse of Ansett destroyed the livelihood of thousands of people, and has caused immense pain over the past decade," said ACTU President Ged Kearney.

"This has been a long and arduous journey, not only for Ansett employees but for their unions.

"The payment of almost all of their entitlements will not ease that pain, but delivers some justice to the Ansett workforce.

"Shortly after the airline was grounded, the workers faced receiving just a fraction of what they were owed.

"The ACTU and Ansett unions worked tirelessly, both publicly and behind-the-scenes, to ensure the workers were not short-changed. That included making sure employees were at the front of the queue of creditors, and seeking the administrators realised every possible cent in asset sales and that was paid to the employees.

"No workers should have to go through the same long ordeal as those at Ansett, just to receive what is rightfully their money."

The ASU's Linda White said, "Without the strong union membership that the ASU had at Ansett, there's no way we would have achieved 96 cents in the dollar. It's a testament to their collective strength."

Ms Kearney said the Ansett collapse had highlighted deficiencies in the General Employee Entitlements and Redundancy Scheme (GEERS), most of which have now been rectified by the Gillard Government's Fair Entitlements Guarantee. It means 97 per cent of eligible workers will receive all the redundancy pay they are owed because of the removal of a cap on redundancy payments at 16 weeks.

"These changes have been in place since January, but need to be enshrined in legislation so that no future government can take them away, and workers are not left in the lurch again," Ms Kearney said.